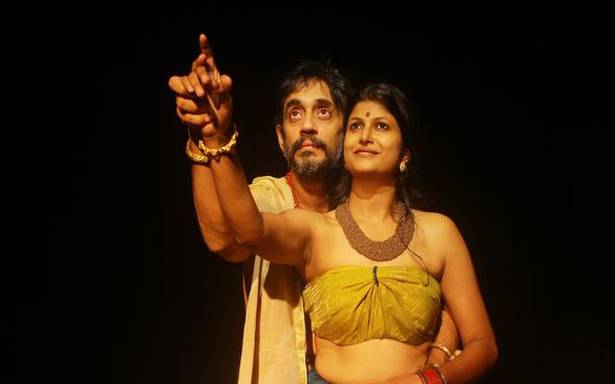 Theatre Nisha’s first live play after a pandemic-induced hiatus of one year, ‘Arundhati’, is based on a monologue from Girish Karnad’s ‘Yayati’

When thespian Girish Karnad made his friend read Yayati — his debut play — a particular monologue instantly caught the latter’s eyes. As praises poured in for the monologue, the then 21-year-old Karnad thought the rest of the play was not upto the mark. However, Yayati soon became one of his most celebrated works. This monologue by the character of Swarnalatha has always fascinated Chennai-based theatre director V Balakrishnan of Theatre Nisha, as well. “This one-page monologue became a whole new play in my eyes, with a different scenario, ” he says. Arundhati, which will see its live outing this weekend in Chennai, thus came into being.

Written as a tribute to Karnad, Arundhati investigates the life of two newly-weds who are trapped within the inquisitions into their past. Her husband’s jealousy and line of interrogation lead him to self-destruction.

“The play takes off from the fact that her husband had some apprehensions— in the sense that he was not able to lose the doubt that his wife had possibly may have had something to do with a teacher of hers. The truth is the opposite. He is not able to get over this and goes into a voyage of self destruction in his nuptial night,” Balakrishnan narrates.

The narrative shows us how Swarnalatha resolves this situation.While in Yayati, this conflict is resolved over a period of three months, in this adaptation, these questions are addressed in their nuptial night. Arundhati’s narrative will also be aided by live singing by Uma Sathya Narayanan, the recipient of Kerala Sangeet Natak Akademi Award in 2019. Though the play, which was shortlisted for the Sultan Padamsee Playwright Award 2020, was written last year, the cast and crew had been rehearsing for the past six weeks.

The play, featuring Balakrishnan and Shivangi Sigh in lead roles, is Theatre Nisha’s first live show after a one-year hiatus due to the pandemic. In this break, they had been creating content for the online platform. Though their relationship with the stage continued, the communication with the audience, the most exciting part of shows, was missing, says Balakrishnan. He is glad now, though. “It is like meeting a friend who is visiting you after a long time. It is emotional.”

Arundhati will be performed at Alliance Francaise of Madras on March 13 at 3 pm and 7 pm. The play will also be performed on April 10, at Darpana in Ahmedabad.