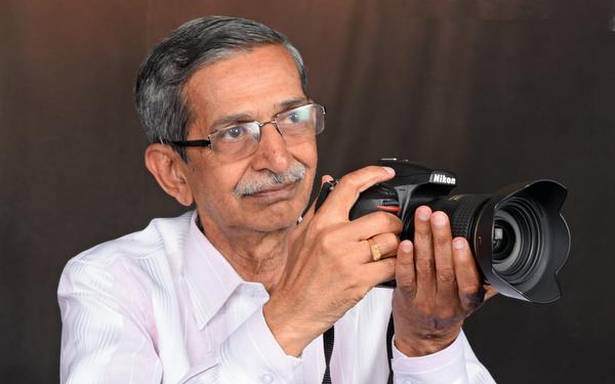 Septuagenarian Ashwath Narayan may have retired as a cinema still photographer, but he remains a busy man. He has images that have captured, actors and directors from 1965 to 2000. “I have around three lakh images and am converting them and the negatives into a digital format,” says Ashwath, adding “This is my way of preserving their legacy.”

Ashwath credits his brother for instilling the passion for still photography in him. “He was running the Three Stars Studio in Madras then. It was dedicated to cinema photography. He invited me to take care of his studio as soon as I was done with my Class X exams. One day, a senior photographer did not turn up on set and I was sent to take his place.”

Ashwath later realised he was working on the sets of the Kannada film Belli Moda, which featured Kalpana, directed by Puttanna Kanagal.

Ever since, Ashwath has seen everything through his lens.

“I was the still photographer for 11 films with Puttanna and 15 films with Siddalingiah. I also worked on Guru Shishyaru, Malaya Marhutha… Those days still photography and print reigned; people would wait for cinema content, which was published only on weekends. Photographs would be given a massive display on the news pages. We revelled in that glory.”

Ashwath says many filmmakers leaned heavily on still photography to check the continuity of the scenes. Images would be documented in albums, which kept a record of the costume, make up and hairstyle.

Many of Ashwath’s images find their way into stories in print and books on cinema even today: 300 of his pictures, are in Dr Rajkumar Samagra Charithre, written by Doddahulluru Rukkoji. The coffee table book won the National Award in the Best Book on Cinema category.

While they worked in both black-and-white as well as colour, the former was more challenging, according to Ashwath. “We had to capture every detail and bring the image to life with just those two colours. Technology has unfortunately killed certain nuances of photography. ”

He adds, however, “We must use technology to document our heritage.” He plans to create a virtual library for cinema, which will give access to anyone with an interest in Tamil, Kannada and Malayalam cinema.