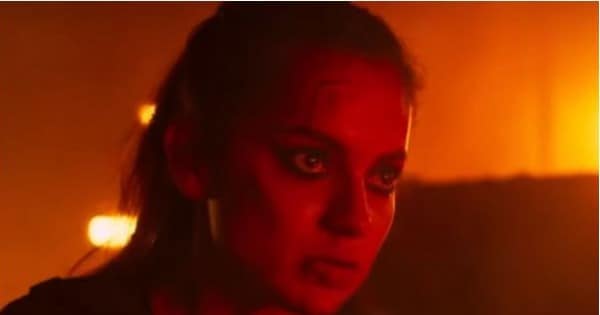 A few days ago, the trailer of Kangana Ranaut starrer Dhaakad was released and it had impressed one and all. Now, eight days before the film’s release, the makers have unveiled the second trailer of the movie and it is simply amazing. Zee Studios tweeted the trailer and wrote, “With every passing minute, the storm is nearing! Who will put this storm to an end? Agent Agni or Rudraveer? Watch #DhaakadTrailer2 Now https://bit.ly/DhaakadTrailer2 #Dhaakad is releasing in theatres on 20th May 2022 #AgniAaRahiHai.”

Well, netizens are loving the trailer, especially the dialogue ‘You messed with the wrong girl bro’. A netizen tweeted, “#DhaakadTrailer2 out. A better action movie in every way is coming from Bollywood. Its cinematography looks amazing. #KanganaRanaut will boil this time too. Everyone is going to be a fan of @rampalarjun ‘s look and dialogue. This fight is going to get tough on May 20th..” Another netizen wrote, “Goosebumps. I can’t be more Proud of my girl Kangana Ranaut for being such an amazing actress You messed with the wrong girl bro?? #Dhaakad #KanganaRanaut Watch #DhaakadTrailer2.” One more Twitter user posted, “’You messed with wrong girl bro’ What a trailer guys.. check it out super excited!”

Well, Dhaakad won’t be getting a solo release at the box office. The movie is all set to hit the big screens on 20th May and it will be clashing with Kartik Aaryan, Tabu, and Kiara Advani starrer Bhool Bhulaiyaa 2.

BollywoodLife had done a poll on which film will take a lead at the box office, Bhool Bhulaiyaa 2 or Dhaakad, and the Kangana Ranaut starrer had won the poll with 65 percent of the votes. Now, after watching the trailer of Dhaakad we are sure fans will be more excited about the movie.