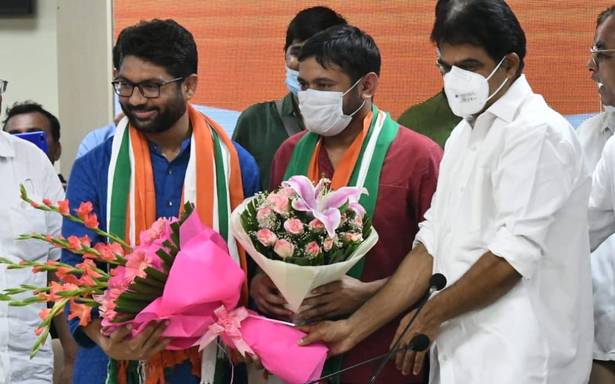 Gujarat independent MLA Jignesh Mevani has also come out in support of the party.

"Congress is the oldest and the most democratic party of the country. I believe and so do many others that this country can’t be saved, if the Congress can’t be saved," Mr. Kumar said.

"The country has regressed back to 1947. I have joined the Congress because it is the party that is carrying forward legacies of Mahatma Gandhi, Ambedkar, Sarojini Naidu. And to those who claim that the opposition has weakened should remember it is bad news for each one of us," he added.

Mr. Kumar had joined the Communist Party of India (CPI) ahead of the 2019 Lok Sabha election and had unsuccessfully contested from Begusarai in Bihar against Giriraj Singh of the BJP.

“Kanhaiya Kumar is a symbol of fighting for freedom of expression. He has set an example by fighting against fundamentalism during his student days. His joining hands will enthuse party cadres,” Congress general secretary K.C. Venugopal said.

Gujarat Dalit leader and Independent MLA Jignesh Mevani has also come out in support of the party.

Mr. Mevani who is an independent MLA will not be formally joining the Congress because he will have to give up his seat.

"As a nation we are going through an unprecedented crisis! The very idea of India is in peril. In such a situation, what is the fundamental duty of a citizen, to work against the forces," said Mr. Mevani.

“I will fight on the Congress symbol in the next Gujarat Assembly elections,” Mr. Mevani added.

Mr. Mevani’s support to the Congress comes at a time when it is wooing the scheduled castes community after handpicking the first Dalit Chief Minister of Punjab.

However, the party suffered a fresh setback in the Punjab on Tuesday when State Congress chief Navjot Singh Sidhu resigned.