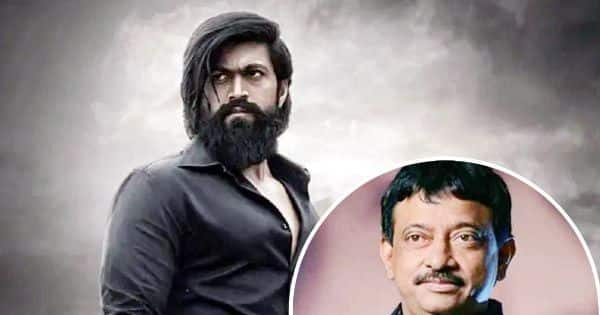 Ram Gopal Varma’s second name is controversial. The controversial king has made a statement on south superstar Yash’s film KGF Chapter 2 that might not be appreciated by the actor’s fans and well-wishers. Ram Gopal Varma in his recent interaction, RGV revealed that the Bollywood big names weren’t pleased with Yash’s KGF Chapters 1 and 2 and wondered why it was a massive hit. He even dragged The Kashmir Files and said to Bollywood Hungama, ” Two films that have f**ked up everything are KGF – Chapter 2 and The Kashmir Files. They are the opposite ends of the spectrum. The scary part of KGF – Chapter 2 is that nobody in Bollywood liked it. When a film you didn’t like does such numbers, you’ll be confused and you don’t know what to do.”.

Well, this isn’t the first time RGV slammed Yash’s film, earlier too he had slammed the film over its content and called it a dark cloud on his Twitter. He wrote, ” KGF2 is like a large dark cloud casting a doomsday shadow on all the other big films and the black clouds torrential collections are draining all other stars and star directors.”. In his another tweet, he said that KGF 2 is a quicksand just swallowing up all old-fashioned buggies. While KGF Chapter 1 and 2 was a massive hit and people are crazy over Yash and his style as Rocky Bhai. Shahid Kapoor on Karan Johar’s show had declared him the biggest hero in the industry.