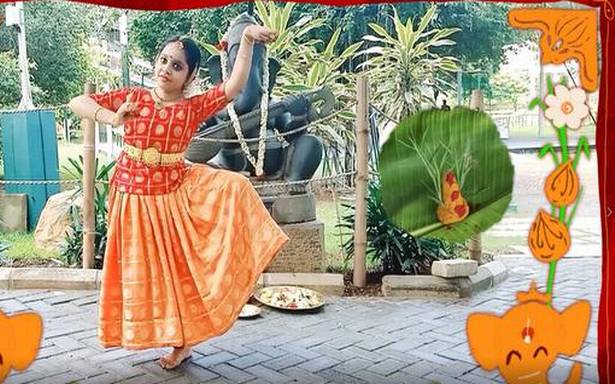 The tale of Rudraksh

In another video, a young boy named Rudraksh tells the story behind his name, explaining about Shiva and the rudrakshamala, and goes on to play the tabla, identifying Shiva as the god of rhythm.

A team of 70 young storytellers presented stories like these in 55 episodes of a series that was streamed online over 42 days recently. Kutty Kahani — Eternal Stories, Young Storytellers was the brainchild of Bharatanatyam dancer and guru Ananda Shankar Jayant, who is also the founder of Natyarambha.

With so many children stuck at home during the pandemic, Ananda saw that children who had their grandparents living with them got to listen to traditional tales from the two epics and learn about the myths. But many other children were left out. “Since these children are unfamiliar with many parts of cultural history, I used the digital platform to make some such stories accessible to them in a medium they are comfortable with,” she says.

Ananda’s brief was clear. The narration was to be done by children aged between five and 13, in any language, through any art form of their choice — from mime to poetry. She asked the parents to make sure the video stories were less than five minutes long, so that they could be informative and interesting but not tedious. And she wanted to add something more, to compete with the glut of visual content on the market. “Gunjan Ashtaputre, my designer, not only created a colourful animation theme, but also enhanced the narratives in each episode with images of sketches, added on to make the narrative more impactful,” she says. It’s not just the visuals — the theme music is also distinctive.

Reminiscent of Jim Reeves’ ‘Bimbo,’ it is quick to capture the attention of young children.

The videos in their final avatar went through a long process to get there. Ananda had made it clear that complete responsibility for creating the stories lay with the parents. She had to send several videos back, asking them to stick to the stipulated format and length. In some cases, she had to ask them to record the voice separately, so that it could be synchronised later with the visual content. The content was then edited and sent for animation. That’s when visuals drawn from the storyline as well as subtitles in English and regional languages were added. Relevant slokas were interspersed wherever possible.

Narthaki.com, Anita Ratnam’s dance portal, came forward as a digital partner for streaming. SBI and the Indian Council for Cultural Relations, New Delhi, also supported the initiative. When the videos went online, the advantage of the digital format was immediately clear — they attracted a large viewership.

“The most satisfying experience has been the fact that everything from communication to creation has been done digitally,” says Ananda. “Once we started streaming it, the response was phenomenal and children across the globe came forward to participate with great enthusiasm. So overwhelming has been the response that we will need to present another season later. It would be exciting if the idea gains momentum and more people come forward.”

The author is a Chennai-based freelance writer.