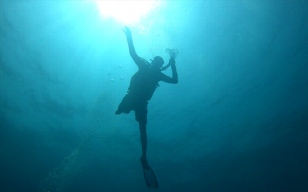 The CLAW Global team is training the differently-abled to conquer sea, land and air for the Triple Elemental World Record. All you need to join them is an unconquerable spirit

The Special Forces (SF) are the Jedi knights of the Indian armed forces: elite warriors accustomed to volunteering for missions impossible. More at home in rocky defiles where snow falls in thick flurries, lush jungles where the mood is as oppressive as the grey nimbus cover and the dark fathoms of our oceans, they live their lives in least-known corners of our country. Trained to survive, stabilise and thrive in extraordinary situations, they retire in their mid-30s with skill sets such as sky diving, scuba diving, mountaineering, unarmed combat and emergency medical response. In the hinterland from where most hail, and in the corporate jobs that are their second careers, these skills rust.

In January 2019, Major Vivek Jacob, a Para SF officer with 14 years of experience in the Indian Army who had to hang up his boots following a combat skydive injury, founded CLAW Global (Conquer Land Air and Water), to teach life skills to adventurers and people with disabilities (PWD). Its core team, mostly in their 30s, also comprises Major Arun Ambathy and five soldiers drawn from the Para, Para SF regiments and the Navy’s marine commandos (MARCOS).

“Team CLAW comprises soldiers who have had extended exposure to hard combat, and civilian volunteers who swell our ranks. Premature retirement in the SF is high — these soldiers look for change after years of tough living and bloodshed — about 300 retire every year,” says Chennai-based Arun, one of CLAW’s directors, who retired after a slew of injuries. “There are no ecosystems to absorb these men and CLAW helped them fit into a job profile they are comfortable with. In February 2019, CLAW’s Operation Blue Freedom began teaching PWDs to scuba dive to secure their dignity.”

Despite the COVID-19 pandemic, team CLAW has offered free scuba diving training for more than a 100 PWDs paralysed by spinal cord injuries. It is now assembling a team for the first of the Triple Elemental World Record scheduled to be held in Maldives in April.

“We first train in a pool, move to quarry diving and then to the open sea. PWDs will also be trained in adaptive skydiving [Dubai] and in adaptive mountaineering [Siachen glacier] for the record. We hope to complete the three records by end-2021,” says Arun over phone, adding that this is an open call to PWDs and the able-bodied to join them for the record. “PWDs have the spirit — like the SF they learn to thrive in a tough world — but sometimes not the money or the circumstances. We want to bridge that. Going forward we hope NGOs and corporates can directly sponsor the PWDs.”

In Puducherry an unlikely smattering of enthusiasts — teenagers, doctors, college students and veterans — has banded together to learn diving. “The level of disability has never been a problem as we are trained in adaptive diving. We have mixed batches — able-bodied, amputees, wheel-chair users, some paralysed neck down… But their spirit is intact and we want that to diffuse through to others,” says Arun, adding that the venture has been lauded by the Government of India. “When we took Salma Salmath, a person with disability, diving in Lakshadweep, the powerful image of her in a hijab underwater opened the gates for others.”

In the Bay of Bengal, a boat chock-a-block with diving apparatus rocks about, revealing little of the calm cobalt-blue waters beneath. Coorg-based Dr Deepa Venkatesh, a 34-year-old dentist with polio who uses crutches, follows her instructor retired Havildar Prabash Kumar as she gingerly lowers herself into the ocean where visibility is 12 metres on a good day.

“Our instructor to student ratio is 1:1. We descend to 18 metres through eight progressive immersions and monitoring of vitals — people with spinal cord injuries cannot thermo-regulate and may lack bladder and bowel control,” says Arun.

Adventure is for all

Instructors use a combination of encouragement and instruction. As a sweetener there is a bonfire in the evening but during the day it is hard work. “This was the first time I had heard of adaptive scuba diving in India and now want to participate for the record too. CLAW worked around my disability, weighing down my legs so that I didn’t keep floating up. The instructors are empathetic and make us practise on a par with others; that makes a world of difference,” says Dr Deepa, adding that she is keen on sky diving as well. “Apprehensions abound but CLAW also addresses issues of phobia and sudden ascent that can be dangerous. They are very systematic. Adventure is for everyone.”

That is something Petty Officer Pardeep Ritwal, MARCOS veteran, believes in. Pardeep, a combat diving instructor lost his leg to an accident but now helps PWDs dive. He hops to the edge of the ocean and dives deep emphasising that if you are not living life on the edge you are taking up too much space.