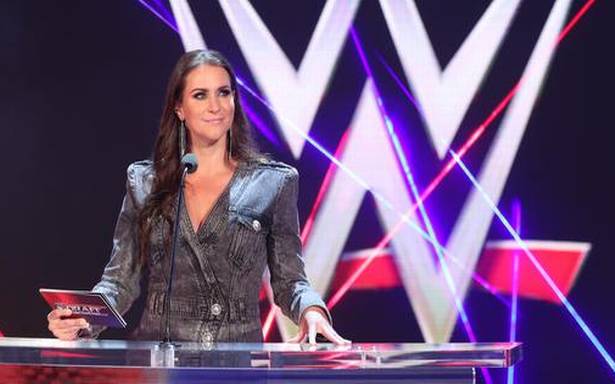 The WWE Chief Brand Officer talks about being associated with a worthy cause, her memories with The Rock, and why her children could continue her family’s legacy

A true-blue icon of the brand, WWE Chief Brand Officer Stephanie McMahon has seen it all. Even though she’s a fourth-generation member of the prestigious McMahan wrestling family, the 45-year-old has worked her way up the ladder in the media and entertainment company; from being a receptionist to a pro-wrestler to her current leadership position.

The wife of wrestling legend Triple H — who currently serves as the COO of WWE — Stephanie also spearheads and promotes several goodwill initiatives, one of them being the multi-year extension of the international partnership between Special Olympics and WWE.

Founded in 1968, Special Olympics is a global movement to end discrimination against people with intellectual and physical disabilities. With more than six million athletes and Unified Sports partners in around 200 countries, and more than one million coaches and volunteers, Special Olympics organises more than 30 Olympic-type sports and 100,000 games and competitions annually.

WWE stars are set to continue engaging with Special Olympics athletes all around the globe, inspire them, and vice versa. At a recent event to announce the multi-year extension of the partnership between the two brands, Stephanie found time to have a quick chat with us.

“I’ve had the pleasure of working with the Special Olympics since I was in high school when I volunteered with WWE. These athletes are so full of love for one another, and there’s this feeling of a shared experience all round.”

She adds, “You know, it’s the WWE superstars that look upto these athletes, not the other way round. It really stands for ultimate sportsmanship, and together, we make such a powerful team. The athletes are always competing and learning what they are capable of, and it’s an unique opportunity for them to realise what they can achieve.”

Pro-wrestler Drew McIntyre was also present at the event, where the WWE stars played bowling with the Special Olympics athletes.

McIntyre says he feels fortunate to have been chosen as a Global Ambassador for the cause, “We started interacting with them online, and did our first in-person event just recently in Vegas. This collaboration has become one of my favorite things to do outside the ring; it’s a passion project for me. After knowing their stories, positivity and attitude, I find myself wondering what I have to complain about when I have a bad day. It’s really changed me in a lot of ways.”

With the COVID-19 pandemic slowing down globally, Stephanie says that the WWE is currently working on plans to take their product globally, and India is definitely one of the countries they are looking to expand in.

“Also, with WWE now available on Peacock in the US, we are looking ahead to it being available on streaming platforms across the world,” she says.

With the latest WWE pay-per-view special Survivor Series just behind them last month, Stephanie says it was a fine tribute to The Rock’s career (it commemorated the 25th anniversary of his WWE debut at the 1996 Survivor Series) and his new film, Red Notice on Netflix.

“I have lots of fun memories with the Rock! I think I slapped him the hardest I’ve ever done in the ring once; I remember being quite shocked at it myself later. But of course, he got back at me by bringing in Ronda Rousey who broke my arm. I still suffer from post-traumatic stress thinking of that incident,” she says, grinning.

Going forward, Stephanie says that it would be fantastic for The Rock to return to WWE for a face-off with Roman Reigns, the biggest name in the brand today. “I also feel Tyson Fury (boxer) is made for WWE; he has all the personality and charisma, the power and the speed too..”

Stephanie also confirmed that Triple H is now doing fine and recovering well after his recent heart surgery. Finally, would any of their children follow the family’s legacy and enter the wrestling ring soon? “We have three daughters; they are 15, 13 and 11. You know, our oldest said when she was eight years old, ‘Mummy, I don’t want your job. Daddy, I don’t want your job. I want Pop’s (Vince McMahon) job!’ Just like her grandfather, she wants to be the boss. So we’ll see what happens, she has already started training in the ring,” she laughs and signs off.