The US’ country score has fallen by 51 per cent in the last 10 years from 4,227 in 2010, to 2,067 in 2020, as per the report. Despite the dip it is the US-based California Institute of Technology which has attained first place to become the most employable university in the world India is the 15th most employable country in the world, as per the Employability ranking 2020 released today. India has seen a rise in employability, up from 23rd rank in 2010. The most employable institute in India being the IIT-Delhi which has attained the 27th rank worldwide. The report termed IIT-Delhi as “a microcosm of India’s success story in the past 10 years”. India is on a rise while its western counterparts — US and UK are seeing a decline, reveals a 10-year study by French consultancy Emerging and published by the Times Higher Education (THE).

Beyond their elite institutions, UK and US universities have declined while Germany, mainland China, South Korea, and India are the most progressive performers for employability, claims the report. The US country score has fallen by 51 per cent in the last 10 years while the UK’s country score dropping by 46 per cent.

The report claims that the US universities are struggling to compete in terms of value for money, as they lack the strong global brand recognition of their elite compatriots. While in the UK, only a small group of elite institutions are covering the general decline of its higher education system. “Despite the likes of the University of Cambridge, University of Oxford, and Imperial College London improving or maintaining positions in the top 20 since 2019, the UK has fallen from the second spot in 2010 to fourth in 2020 in terms of the best-performing countries and regions for employability,” as per the study.

Despite the dip, it is the US-based California Institute of Technology which has attained first place to become the most employable university in the world. Further, the Massachusetts Institute of Technology has gained second, and Harvard University got the third spot. A total of 32 countries and regions represented in the top 150 as opposed to 24 in 2010 in the French consultancy Emerging and Times Higher Education (THE)’s Employability Rankings 2020.

Most employable country in the world 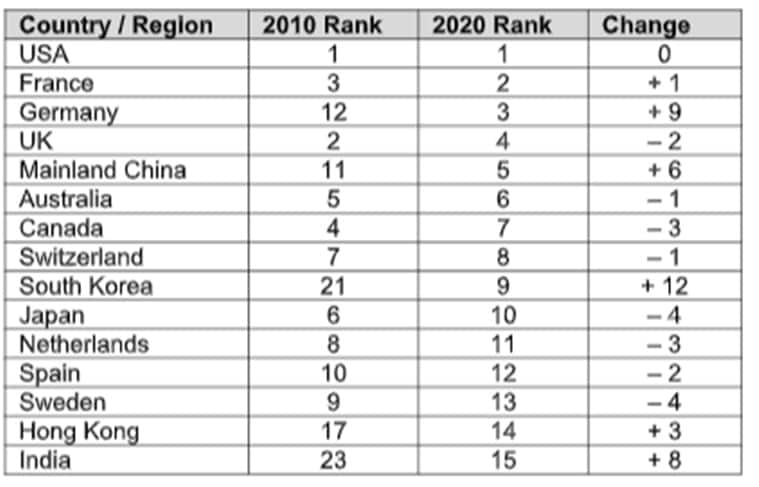 Universities will have to focus on their employability as the study claims that over the past 10 years, students and their parents are even more motivated by the ability to get a job rather than the brand name or reputation that universities hold. The COVID-19 pandemic has made the challenge of finding work even more difficult for graduates worldwide, claims the report.

The strongest challenge to the traditional dominance of the US and UK is coming from Asia. Mainland China’s country score saw an increase of 132 per cent over the past 10 years and it is now ranked as the fifth most employable country or region worldwide. Even South Korea has seen huge improvements over the 10-year period. It is now the 9th most employable in the world after a rise of 1157 per cent in its country score, over the 10 years.

Two of the biggest English-speaking challenges to the US and UK are Canada and Australia, which have both seen steady improvements over the past decade in the rankings. Over the past 10 years, both countries have retained the top 10 positions for the best-performing countries and regions for employability.

Jamie Ramacciotti, head of student content, THE, commented: “Employability represents the return of investment on education for many students and their families, and it can be a critical part of the decision-making process as students decide where and what to
study. Students want to feel confident that the investment of both time and money in a degree program will make them strong candidates for jobs post-graduation. The latest Employability Rankings show that students have a wide range of choices when it comes to the study destinations that will help power the early years of their career. While the elite institutions of the US and UK remain right at the top of the tree, Australia, Canada, and many others offer a first-class education if employability is your primary goal.”

Most employable institutes in India

Most employable institutes in the world –