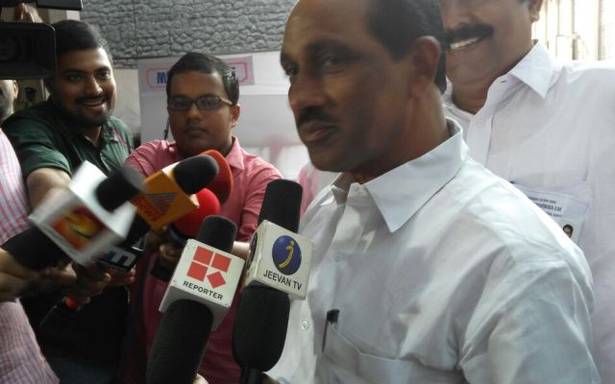 The Vigilance and Anti-Corruption Bureau (VACB) has given a clean chit to former Excise Minister K. Babu in the alleged bar bribery scam.

Mr. Babu had resigned from the Congress-led United Democratic Front (UDF) on January 23, 2016 after a vigilance court in Thrissur asked the VACB to register a case against him over allegations of nepotism in awarding bar licenses and tweaking the Abkari policy to help some of the owners of bar hotels. The Congress leader withdrew his resignation a week later on January 30 after the UDF refused to accept it.

In its report submitted before the Vigilance Court, Muvattupuzha on March 4, the Central Range of the VACB admitted that there was no substantial evidence to prove that Mr. Babu had misused his official position to display preferential treatment in the award of foreign liquor licenses.

The allegations that he had used government orders at the behest of the office bearers of Kerala Bar Hotel Association (KBHA) and his benamis with an ulterior motive to disrupt the functioning of licensees and make unlawful gain were baseless. The accused had no specific role in these decisions as it were taken by the Cabinet, it said.

The VACB also turned down the allegations that Mr. Babu had closed down the outlets of the State Beverages Corporation in favour of the bar owners.

On allegations that the KBHA had collected crores from its members in the name of giving bribe to the Minister for not increasing the license fee for sale of foreign liquor, the Vigilance said that the legal fund of the association, which was alleged to have been used as bribe money, was used for meeting the legal expenses of the organisation. There was no evidence to prove the allegation, it said.

Reacting to the VACB report, Mr. Babu said that he was relieved that the truth has finally prevailed while reminding that his detractors had tried to snap his political career by raising baseless allegations.