The person behind this sanitizing operation was Don Wakamatsu, the Rangers’ bench coach. How did a baseball lifer — someone who has worn many different major league teams’ uniforms as a player, coach and manager, and who won a World Series ring in 2015 with the Royals — end up directing a decidedly modern take on spring cleaning? On Wednesday morning, four days before spring training games were to begin and fans would return across Major League Baseball, a 6-foot-wide drone flew throughout a 10,500-seat stadium in Surprise, Arizona, the preseason home of the Kansas City Royals and the Texas Rangers. The drone sprayed a cleaning solution that, according to its manufacturer, will protect surfaces from germs, including the coronavirus, for more than 30 days.

The spraying took 90 minutes with a drone named Paul.

The person behind this sanitizing operation wasn’t a health or stadium official. It was Don Wakamatsu, the Rangers’ bench coach. How did a baseball lifer — someone who has worn many different major league teams’ uniforms as a player, coach and manager, and who won a World Series ring in 2015 with the Royals — end up directing a decidedly modern take on spring cleaning?

It started with a background in farming, an interest in technology and an idea of how to adapt aspects of both interests to the current predicament facing us all amid the pandemic. He already knew how to spray crops using drones, so the transition to sanitizing seats was not much of a stretch.

Although Wakamatsu, 58, grew up in Northern California, he often visited the 40-acre farm in Hood River, Oregon, of his paternal grandparents, who had been held in internment camps for Japanese Americans in the 1940s. They grew cherries, apples and pears. 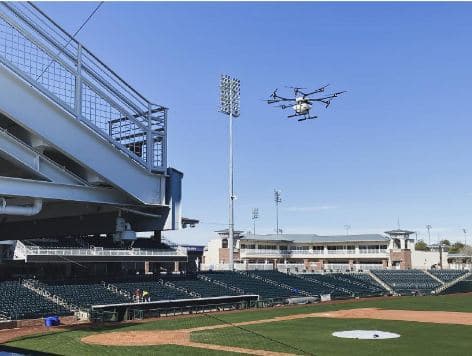 “I remember having to get up at 4 in the morning, go out there in the orchard and change the sprinkler,” he said in a phone interview. “It was just a pain. But that’s part of the sacrifice and growing up, and what you did on the farm.”

Those memories stuck with him even as his baseball career eventually took him to the Chicago White Sox, where in 1991 he appeared in 18 games, his only playing time in the major leagues. After bouncing around the minor leagues with several organizations, he became a coach. In 2009 with the Seattle Mariners, he became the first manager of Asian descent in the major leagues. The Mariners went 127-147 in his nearly two seasons at the helm.

It wasn’t until 2017, while serving as the Royals’ bench coach, that Wakamatsu turned his passion for food into a foundation, WakWay, with a mission inspired by his family’s cherry-growing waste. The nonprofit began saving fruits and vegetables and donating them to disadvantaged communities in Arizona and Texas.

But in the past few years, Wakamatsu has focused more on so-called precision agriculture and helping smaller farms survive. As a child, he said, he remembers breathing in pesticides sprayed over crops from biplanes.

With the explosion of drone technology, Wakamatsu said, it was only natural to use it in farming as a more environmentally friendly, efficient and safer way to spray crops. His foundation bought its first drone last year. It now has four, each capable of carrying 2 1/2 gallons of liquid.

Over the winter, as MLB and the players union faced the prospect of staging a normal 162-game 2021 season with fans as the pandemic continued, Wakamatsu brainstormed ways to redirect his efforts to baseball. He said his foundation considered drone spraying at the Rangers’ stadium in Arlington, Texas, last year, when spectators were admitted only during the final playoff rounds of the abbreviated season, but wasn’t ready to do so.

“Can we make fans feel comfortable to come back?” he said. “We’re tired of playing with no fans. It was only natural, with the relationships I had at that ballpark, to say, ‘Let us come in and help.’ I want to be safe.”

It took months of discussions and a drone-spraying demonstration. Earlier this month, the city of Surprise agreed to a deal with Wakamatsu’s foundation to spray the stadium. Whatever is made from the work, he said, will be reinvested in the foundation. He can fly the drones, but trained volunteers did so Wednesday.

“I’d like to be the official drone spraying company of MLB one day,” he said, laughing.

As spring-training games begin in Arizona and Florida on Sunday, every park’s seating capacity will be based on local and state government guidelines — from as low as 9% (at Scottsdale Stadium in Arizona, the San Francisco Giants’ spring home) to as high as 28% (Hammond Stadium, the Minnesota Twins’ spring home in Fort Myers, Florida.)

Health experts have said they believe that outdoor sporting events — particularly in baseball, where the majority of MLB stadiums are open air — can be staged safely.

“If you space people well enough, you get people to wear masks, you have situations that people don’t crowd at the concessions near each other to get food and things like that, you can pull it off in a pretty safe way,” Dr. Anthony Fauci, the U.S. government’s top infectious disease expert, told The New York Times this month.

Even though experts have learned over the past year that the primary form of transmission of the virus is person to person, and that surfaces are a relatively rare source of spread, that hasn’t discouraged a general rethinking of hygiene or the proliferation of companies pitching new cleaning services or products.

It doesn’t do any harm, though, to spray seats, said Catherine Troisi, an infectious-disease epidemiologist at the University of Texas Health Science Center at Houston.