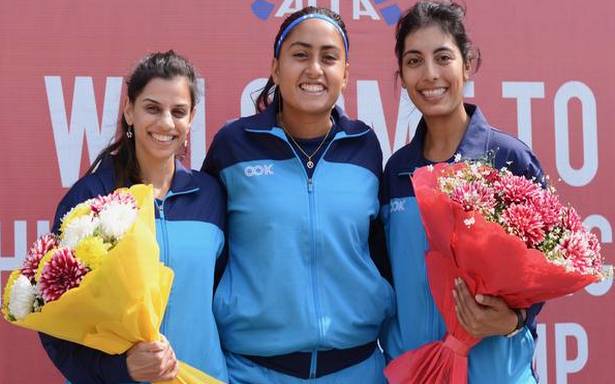 The president of the All India Tennis Association (AITA), Anil Jain, assured 100% support from the national federation and pleaded the players to give their 100%, in an interaction with them at the end of the High Performance training camp for girls at the DLTA Complex here on Friday.

Unable to join the players at the venue owing to other commitments, the Rajya Sabha Member of Parliament, Anil Jain said, “You are the future of the country. Only you can put Indian tennis on the world stage”.

Explaining that the national federation was planning to set up the National tennis centre and support about 30 players, the AITA president said that every effort would be made to address all the problems of Indian tennis and find solutions.

Commending Ankita Raina’s doubles triumph in a WTA event in Melbourne earlier in the day, Anil Jain told the girls in a virtual meeting, “you can be like Ankita and Sania Mirza. You can go further ahead”.

The intense training over a fortnight was followed by a tournament on a league-cum- knockout basis, in which Akanksha Nitture beat Jagmeet Kaur 6-3, 6-3 in the final.

The national coach Zeeshan Ali congratulated the players for their effort and announced that the champion would get a wild card entry into the main draw in one of the ITF women’s tournaments scheduled in March.

Summing up the experience on behalf of the players, Reshma Maruri, who beat Kashish Bhatia for the third place, thanked the coaches Zeeshan, Namita Bal and Shivika Burman.

“We lost Akhtar Ali, a great legend. But, Zeeshan sir came back quickly for the camp. We are grateful for his commitment and devotion,” said Reshma, lauding Akhtar’s son Zeeshan.

All the players and coaches were unanimous in their appreciation of physio Anand Dubey for taking good care of the players.

On behalf of the AITA, the CEO Akhouri Bishwadeep hoped that the national federation would be able to generate more resources in the near future, to provide the best possible support for the players through the national tennis centre.