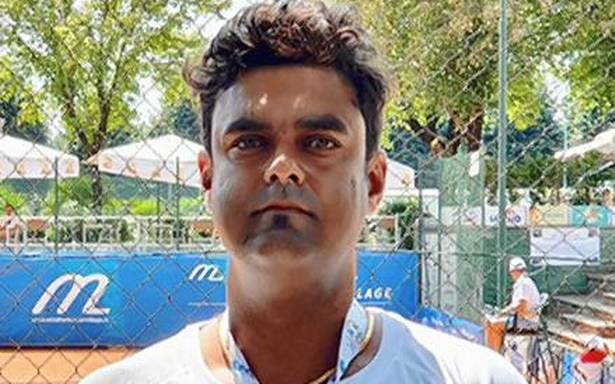 I believe in quality training, rather than quantity, he says

Coaching comes naturally to Ankit Patel, the founder and director of Tennis Vidyalaya in Gurugram. Son of the late Rajesh Patel, a legendary basketball coach who made Chhattisgarh a remarkably strong team, the 34-year-old Ankit is preparing his trainees to excel at the international level.

“To become a good player one needs to become a better human being. The right attitude and positive approach are important to succeed. It was my father’s dream that I should have my own academy,” said Ankit, who has a few experts to drive the kids on the right path.

After having trained under highly successful coach Aditya Sachdeva, when he was ranked No.3 junior in the country behind Rupesh Roy and Jeevan Nedunchezhiyan and worked for him at the Team Tennis Centre for more than 11 years, Ankit opened his centre in 2017. Wrist surgery in both his hands had put an end to his playing career.

Sandeepti Rao has been one of his prominent trainees, and he trains a number of bright youngsters like Victor Mohan Ram, Meher Mishra, Raja Sarvagnya Kilaru, Tamanna Tikoria, Param Pratap Singh, Arjun Pandit, Yana Dhamija, among many others.

The trainees not only work on tennis and fitness, but have yoga and meditation in a holistic approach towards development.

“I believe in quality training, rather than quantity,” said Ankit, who works in two sessions from 6 a.m. every day.

Ankit believes in sustaining the good work, not worrying about the results.

“You don’t have to run after success. Do such things that success comes to you automatically. I am confident that my trainees will make a mark at the world level. The journey has just begun,” he said.

Ankit’s brother Rohit Patel serves as the coach at the Basketball Stadium in Bhilai, named after their father Rajesh, who passed away while travelling from the Federation Cup basketball in Chittoor to the National junior championship in Ludhiana.