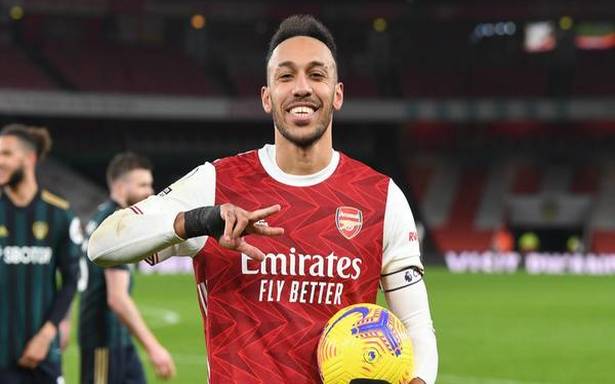 Arsenal moved up a place into 10th with 34 points, snapping a two-game losing streak.

Arsenal captain Pierre-Emerick Aubameyang rediscovered his scoring prowess with his first Premier League hat trick in a 4-2 win over Leeds on Sunday.

Aubameyang put the hosts in front in the 13th minute at Emirates Stadium, teasing Leeds right back Luke Ayling with a series of stepovers before skipping past him. The forward then squeezed a shot between Ayling and Liam Cooper to beat the goalkeeper at the near post.

Aubameyang’s penalty in the 41st minute gave Arsenal a second, and right back Hector Bellerin scored the team’s third goal just before halftime after good buildup play. Aubameyang rounded out his hat trick when midfielder Emile Smith Rowe’s cross set up his captain to head home in the 47th.

“I thought he was superb today,” Arsenal manager Mikel Arteta said of Aubameyang. “He had a great performance.”

It’s been a difficult period for Aubameyang as he has struggled for form and dealt with personal issues — taking time off to care for his mother, who was ill. He had only restarted to regain his form when he suddenly left to be with his mother for several days.

“It’s been a tough time for me, but now it’s time to get the smile back, win games and score goals,” Aubameyang said as he cradled the match ball in his arm.

Leeds came back into the game in the second half, with manager Marcelo Bielsa making a double substitution. Pascal Struijk scored with a towering header from a corner to beat goalkeeper Bernd Leno in the 58th. The visitors got a second in the 69th when Helder Costa slotted past Leno after being set up by fellow substitute Tyler Roberts.

Arsenal moved up a place into 10th with 34 points, snapping a two-game losing streak.

"Life is very different when you win," Arteta said.

Leeds, meanwhile, dropped down a spot to 11th with 32 points.

Arsenal beat the visitors at their own game in the first half, with high-pressing and attacking intensity. Leeds was missing midfielder Kalvin Phillips, who is recovering from a calf injury, and Arsenal was able to exploit space in midfield to pile forward.

Arsenal controlled the first half and were happy to let Leeds have the ball during spells of the match, especially after the Gunners went ahead. Minutes after Aubameyang’s goal, Bielsa’s frustration showed when he kicked a cup from the touchline.

The Argentine manager’s disappointment continued to build as he yelled at his players to press higher and run quicker. But his players’ sloppiness let Arsenal seize control in the first half.

Referee Stuart Atwell pointed to the spot twice in the match, the first of which was overturned after a video review determined that Cooper didn’t trip Bukayo Saka in the penalty area. When Atwell signaled another penalty minutes later, there was no need for VAR to intervene.

Leeds goalkeeper Illan Meslier was careless when he received a back pass and, as Saka pounced on the ball, Meslier fouled him. Aubameyang stepped up and his spot kick easily beat Meslier, whose first-half performance he will want to quickly forget. The Frenchman was also beaten twice at his near post, first by Aubameyang and then by a strong finish from Bellerin.

Bielsa was more pleased with the way his team played in the second half, but he wasn’t impressed with the performance in the first half. He said his team couldn’t deal with Arsenal’s defensive midfielders, Granit Xhaka and Dani Ceballos.