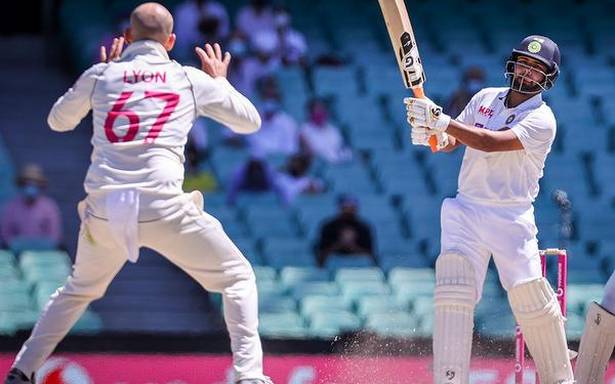 Vihari and Ashwin’s set of unbeaten knocks – 23 and 39 respectively – miniscule in numbers but gigantic in terms of the heart displayed, will endure long in the public imagination.

When Monday dawned, India was supposed to suffer the blues at the Sydney Cricket Ground. A dominant host, a tough second innings, a dressing room groaning with injured men and a tense fifth day of a third Test against Australia, were all intimidating factors. A lesser team would have wilted.

But glorious Monday showed why Tests still matter in this age of emoticons and instant soup. Ajinkya Rahane’s men had the audacity to even seemingly chase an improbable triumph despite the skipper falling prey to Nathan Lyon in the day’s second over.

At 102 for three and with injured personnel like Ravindra Jadeja watching from the change room, a truncated middle-order and a tail too weak to wag, India was at the crossroads.

Yet, Rishabh Pant had other ideas that hinged on an audacious jail-break and it would be apt to mention the iconic lines from the movie Shawshank Redemption: “Hope is a good thing, may be the best of things, and no good thing ever dies.”

The southpaw promptly tore into the Aussie bowlers. It was a counter-attack breathless in its execution and expansive in its imagination.

Pant’s 97, Cheteshwar Pujara’s 77 and the 148-run fourth-wicket alliance they built, revealed that contrasts can work together. Adrenaline and patience can join forces.

On Rahul Dravid’s birthday and as his famous fellow constructor of the Eden Gardens miracle of 2001, V.V.S. Laxman gushed on Twitter, Rahane’s men seemingly dreamt about the improbable and as the day progressed, hope never retreated despite Pant and Pujara’s exits.

Tim Paine’s men did all they could, through their relentless attack and sledges that were in poor taste.

But in Hanuma Vihari, never mind the torn hamstring, and in R. Ashwin, struggling with a sore back, Mitchell Starc, Josh Hazlewood, Pat Cummins and Lyon ran into their next set of immovable objects. Vihari and Ashwin’s set of unbeaten knocks – 23 and 39 respectively – miniscule in numbers but gigantic in terms of the heart displayed, will endure long in the public imagination.

A fourth innings target of 407 was always difficult but through Pant, Pujara, Vihari and Ashwin, India showed that it can step up and finished with 334 for five.

As far as stalemates go, this draw will be remembered for the ages. The series is level at 1-1 and Brisbane awaits with hopefully another round of incandescent thrills.