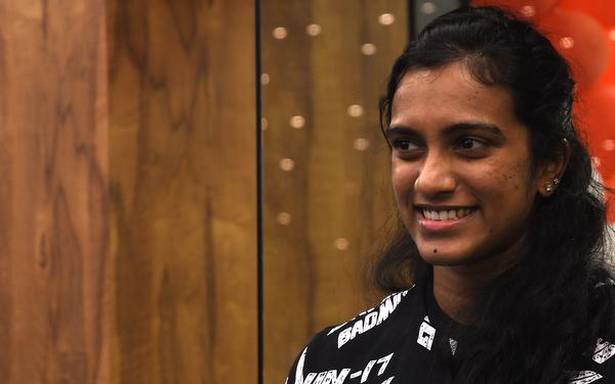 “This year, I would like to win the Commonwealth Games gold, Asian Games title and the All England title, besides the world championships,” Sindhu said

Picking the right events will be crucial in a busy season, reckons top Indian shuttler P.V. Sindhu, who is targetting peak form during the Commonwealth and Asian Games this year to ensure that she clinches the two titles missing from her cabinet.

While the CWG is set to be held in Birmingham in July-August, the Asian Games is scheduled in Hangzhou, China in September.

"This year, I would like to win the Commonwealth Games gold, Asian Games title and the All England title, besides the world championships," Sindhu told PTI ahead of the season-opening India Open Super 500 tournament, beginning in New Delhi on January 11.

It is going to be another hectic season as besides the big-ticket events, there will also be the regular BWF World Tour events, including the Super 1000s, Super 750s and Super 500s, to keep the ranking up.

"It will be important to pick and choose the events as there are lot of tournaments," said Sindhu.

"We have to plan carefully, ranking is also important and it would be important to find my best form at the Asian Games, and the Commonwealth Games." Stressing on the importance of fitness in a busy season, Sindhu said,

"It is important to be mentally and physically fit for each tournament, we need to give 100% effort all the time, so fitness has to be at good levels both off and on the court.

"I believe if you give your 100% in practice, then only, we can produce 100% during the match. There could be times when it might not be your day, however, there cannot be any half-hearted effort." The rise and rise of Sindhu continued in 2021 as she added a bronze at the Tokyo Olympics to her silver medal at Rio de Janeiro in 2016.

The 26-year-old from Hyderabad also claimed a silver at the World Tour Final but couldn’t win a title in the season, something she would look to correct this year.

"The last year was good, there were some wins and some losses. Overall, I am satisfied with how I played.

"There were some semifinals, then world tour final silver. I lost in quarterfinals at World Championships but it’s fine as I gave my best. Of course, Olympic medal was a big thing for me." The 2019 world champion looked subdued in the Thailand leg at the beginning of 2021 but she soon reached the final at Swiss Open in March before coronavirus forced the suspension of three Olympic qualifiers.

The Hyderabadi woman then sizzled at the biggest multi-sport extravaganza, claiming a bronze at Tokyo.

After a two-month break, Sindhu again hit a consistent run, registering three semifinal finishes at the French Open, Indonesia Masters and Indonesia Open and then won a silver medal at the World Tour Finals.

Sindhu, however, couldn’t defend her world championship gold, returning empty handed from the prestigious event for the first time since 2017.

"I stayed home after World championships, taking rest after a hectic last year. Now the new year is starting with India Open, I have trained well and I am looking forward to another busy season ahead." Sindhu will begin her campaign at India Open against compatriot Sri Krishna Priya Kudaravalli. She had claimed the title in 2017.

The Indian will have to compete with the likes of two-time champion Saina Nehwal, Thailand’s Busanan Ongbamrungphan and Singapore’s up and coming Jia Min Yeo for the title.