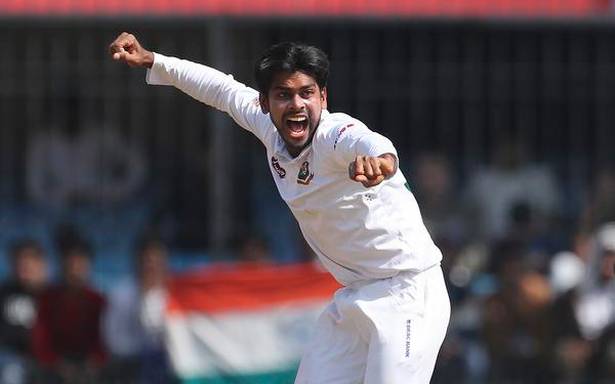 Bangladesh looked to build an imposing lead over Zimbabwe with two days remaining as they were 45 without loss in their second innings at stumps on the third day of their one-off Test at the Harare Sports Club on Friday.

Bangladesh take a 237-run lead into the fourth day after dismissing their hosts for 276 just over an hour before the close with Mehidy Hasan Miraz taking 5-82 and Shakib Al Hasan 4-82.

The spin pair decimated Zimbabwe’s tail with the last five wickets falling for a meagre 15 runs, precipitated by the end of a patient innings of 87 off 311 balls by debutant opener Takudzwanashe Kaitano.

Zimbabwe had resumed on their overnight score of 114-1 with Kaitano and captain Brendan Taylor compiling a promising 115-run second wicket partnership before Taylor went for 81 before lunch and Bangladesh then slowly began to exert control.

Bangladesh, who scored 468 in their first innings, faced 17 overs before Friday’s close with Shadman Islam (22 not out) and Saif Hassan (20 not out) to resume on Saturday.

Bangladesh fast bowler Taskin Ahmed and Zimbabwe fast bowler Blessing Muzarabani have both been fined 15 per cent of their match fees for breaching Level 1 of the ICC Code of Conduct (inappropriate physical contact) during the second day of the one-off Test here.

The players were found to have breached Article 2.1.12 of the ICC Code of Conduct for Players and Player Support Personnel, which relates to "inappropriate physical contact with a Player, Player Support Personnel, Umpire, Match Referee or any other person (including a spectator) during an International Match." In addition to this, one demerit point each has been added to the disciplinary records of the players, both of whom did not have any previous offence in a 24-month period.

The incident occurred in the 85th over of Bangladesh’s first innings on Thursday. After Muzarabani had bowled a delivery to Taskin, the two players moved aggressively towards each other, and contact was made after words were exchanged face to face.

Both players admitted the offence and accepted the sanctions proposed by match referee Andy Pycroft and ratified by the ICC Cricket Operations department as per the COVID-19 interim playing regulations. There was no need for formal hearings.

Level 1 breaches carry a minimum penalty of an official reprimand, a maximum penalty of 50 per cent of a player’s match fee, and one or two demerit points.