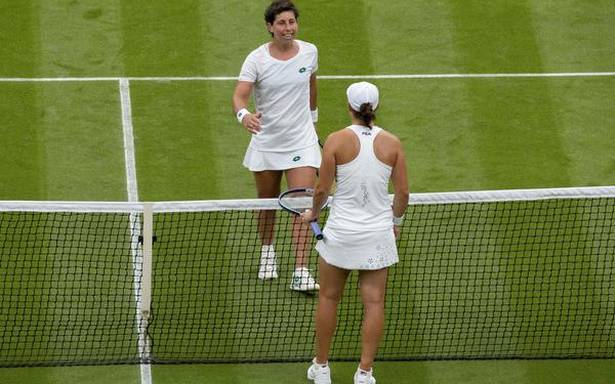 Australia’s Ashleigh Barty overcame a mid-match wobble to reach the second round at Wimbledon as rain once again halted play on the outside courts on Tuesday.

Barty came through 6-1, 6-7 (1/7), 6-1 against Carla Suarez Navarro in a match filled with emotion on Centre Court, whose roof ensured the match could be finished.

Play was due to get underway again at 5:00pm local time (1600GMT) the same time as kick-off in the Euro 2020 last 16 tie between England and old foes Germany at Wembley.

However, 18 first round matches were pushed back to Wednesday with men’s doubles matches cut to best-of-three sets in the first two rounds in an effort to make up the backlog.

Barty’s Spanish opponent made sure her 11th and final appearance at The Championships went the distance just months after returning from a winning fight against cancer.

Barty is bidding to add the senior singles Wimbledon title to her 2011 junior crown on the 50th anniversary of her fellow indigenous Australian’s Evonne Goolagong Cawley’s first title.

Roger Federer and his fellow 39-year-old Serena Williams will be hoping to follow Venus Williams, two years older than them, into the second round.

Venus had some worrying moments in her match against Mihaela Buzarnescu of Romania.

However, the five-time Wimbledon singles champion, playing in her 90th Grand Slam, eventually came through 7-5, 4-6, 6-3.

Federer says he is pumped up and excited for this year’s Championships despite a disappointing second round exit at his traditional warm-up event Halle earlier this month.

With two knee operations behind him Federer says a lot depends on how he performs at Wimbledon including whether he tries to win a first ever Olympic singles title in Tokyo.

Serena may have lost the psychological edge over her opponents but she is still in the top 10 in the world.

With no 2019 champion Simona Halep or Naomi Osaka, Williams’s chances of equalling the controversial Margaret Court’s record of 24 Grand Slam titles on her favourite surface have improved considerably.

At the other end of the age scale Venus’s conqueror from 2019 Wimbledon the then 15-year-old Coco Gauff makes her return and plays British wildcard Francesca Jones.

Barty opened on Centre Court — an honour usually given to the defending champion — due to Halep having withdrawn through injury.

The 25-year-old lost focus when serving for the match in the second set but dominated the third to go through.

However, she joined in the standing ovation for Suarez Navarro as the 32-year-old left the court with the Spaniard’s mother Maria wiping away a tear.

"She is a fighter, an incredible competitor and lovely person and I cannot find one bad word to say about her," said Barty of her opponent.

"She is a genuine champion and will be sorely missed."- ‘Stop wasting our time’ –

Barty’s fiery and entertaining compatriot Nick Kyrgios is scheduled to start his campaign later on Tuesday against Frenchman Ugo Humbert.

The Australian beat Humbert in a five set thriller in the Australian Open earlier this year but the Frenchman has shown his class on grass with victory at Halle.

Humbert’s compatriot Benoit Paire did not escape the ire of the match umpire in his 6-3, 6-4, 6-0 defeat by Diego Schwartzman.

He received a warning from the umpire for not trying as two sets down overnight he lost the third 6-0 in just 15 minutes.

One spectator was moved to shout at the disinterested Frenchman "Stop wasting our time."

The umpire Mohamed Lahyani warned Paire to try harder but Paire was unrepentant.

"I have the right to miss two returns in a row. I think it’s ridiculous."