Earlier this week though, her body was discovered at her home in Iten, in West Kenya, with multiple fatal stab wounds. Her husband Emmanuel Rotich, the prime suspect, was arrested a day later. 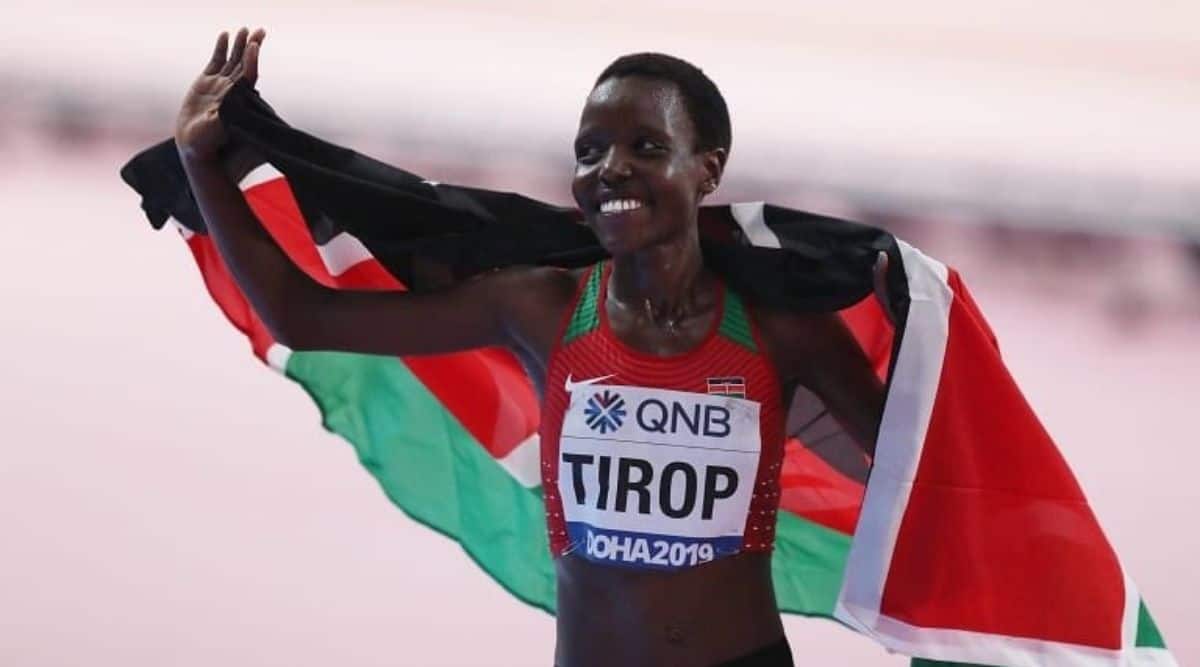 Last month, Kenya’s Agnes Jebet Tirop, 25, set a world record of 30 minutes and 1 second in a 10K run to continue her steady rise in track and field.

Earlier this week though, her body was discovered at her home in Iten, in West Kenya, with multiple fatal stab wounds. Her husband Emmanuel Rotich, the prime suspect, was arrested a day later as he was allegedly attempting to flee the country.

Tirop first burst onto the scene at the 2015 World Cross Country Championship, when the then 19-year-old became the youngest to win the event since South African Zola Budd claimed the title in 1985.

The Kenyan long-distance runner is a two-time bronze medallist at the World Championships (2017 and 2019) in the 10,000 metres and she recently finished fourth in the 5,000m at the Tokyo Olympics. Given her age though, she was widely expected to win more major medals.

Tirop had reportedly been in a relationship with Rotich for over five years. Her parents did not approve of the wedding since the couple allegedly eloped, and also since Rotich was in his early 40s.

“They saw him as someone who was not straightforward in many ways, also the age bracket was very huge and a hindrance,” Kenyan newspaper People Daily quoted a relative.

The relationship started deteriorating though when Tirop caught Rotich having an extramarital affair.

“They never recovered from a fight after Tirop found him with another woman in their matrimonial home, two weeks before the Olympic trials in June,” People Daily quoted a neighbour, Joan Chemos.

According to the People Daily, none of the neighbours knew Rotich well as he kept to himself. Tirop’s family, though, have accused him of taking over her property. Allegedly, whenever Tirop invested in property – she was reportedly on the verge of starting a poultry farming business – Rotich ensured his name was also on the sale deed.

“Manu (Rotich) was a selfish person. He had everything. He was pampered more than the family members,” Tirop’s brother Josephat Keter said to Citizen TV. “When she came back (from Tokyo) she found out that her husband was cheating on her with other women. That was the genesis of their troubles and they parted ways. Agnes came home and informed us that she and Emmanuel had a strained relationship.”

Eventually, there were also reports of domestic violence.

“She was beaten overnight on the day she landed from Tokyo. Her face was swollen,” Tirop’s sister Everlyne Chemwetich told Kenyan newspaper Daily Nation.

Athletes being lured by “coaches” who become “spouses” and start to control the financial rewards earned by the runner is quite common in the country.

Based on what Iten-based athletics coach Peter Bii asserted, it appears Tirop too had fallen for the trap.

“We have a crop of men whose job is to identify potential athletes and befriend them. Once the female athlete starts progressing, the men who masquerade as coaches and spouses control everything,” he told People Daily.

“We have to empower our female athletes mentally and financially, so that they can take full responsibility of their hard-earned money. They need to be independent thinkers. Have your own bank account, control your finances and your investment and don’t transfer everything to your spouse or boyfriend.”

A day before Tirop’s body was discovered, a local marathoner from Kirinyaga – about 110 km from Nairobi – had allegedly been killed by her boyfriend.

News agency Kenyans.co.ke reported that 27-year-old Edith Muthoni was ‘hacked in the head’ by her boyfriend of three years Kennedy Nyamu. Muthoni had allegedly been trying to search through Nyamu’s phone on suspicion that he was cheating on her, before he attacked her.

Muthoni was known to be a keen runner at local marathons and worked as a community scout for the Kenya Wildlife Service.