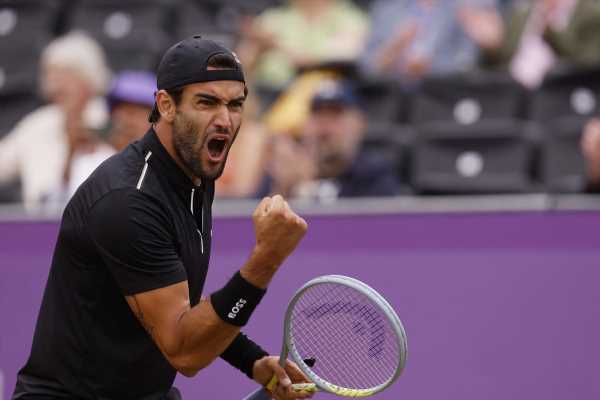 Friday’s sizzling heat had disappeared at the historic London venue, but defending champion Berrettini maintained his hot streak on the grass to win 6-4, 6-3.

The second seed will be a big favourite in Sunday’s final against Serbia’s Filip Krajinovic, who took advantage of a poor display by twice former winner Marin Cilic.

Krajinovic, who had never won a grasscourt match prior to this week, won 6-3, 6-3 against the seventh-seeded Croatian.

Berrettini was briefly held up in the second set by a short rain delay but he returned to break serve and cruised to victory, ending the contest with a neat drop volley. World number 10 Berrettini, who reached the Wimbledon final last year, has now won 19 of his last 20 matches on grass.

His only loss in that spell was against Novak Djokovic in the Wimbledon final a year ago.

The 26-year-old was once again rock solid on his serve, dropping only four points on his first delivery.

Berrettini broke serve in a marathon sixth game and moved 5-2 ahead only to drop his own when serving for the set. He responded in style though, breaking again to pocket the opener.

Van de Zandschulp never looked like turning it around as Berrettini remained clinical in the second set.

Krajinovic, 30, continued to surprise himself as he took apart Cilic whose usually strong serve malfunctioned.

“I don’t like playing on grass, normally I skip the grasscourt events, then turn up and lose in the Wimbledon first round. But maybe I’m starting to like it,” he said on court.