After watching Bayern Munich win the Bundesliga title for the seventh straight year, Borussia Dortmund was left to rue its missed chance 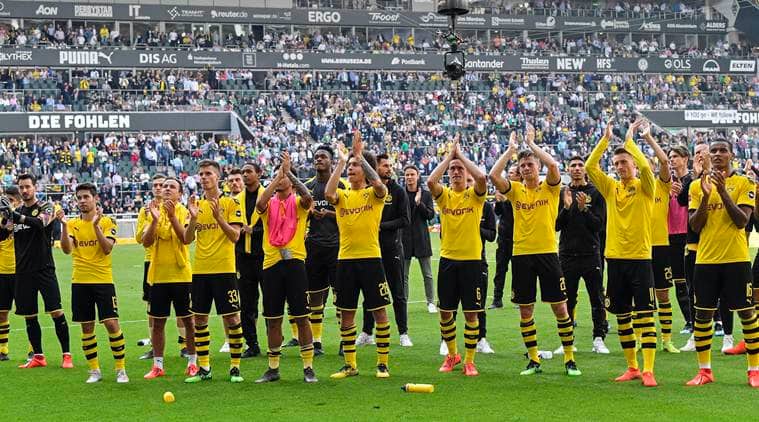 After watching Bayern Munich win the Bundesliga title for the seventh straight year, Borussia Dortmund was left to rue its missed chance. Dortmund held a nine-point lead over Bayern at one stage of the season and was league leader for 21 of the 34 rounds. After an outstanding opening half of the season when Dortmund played fast-paced, free-flowing attacking soccer, the young team threw its lead away in the second half.

“I know the chance was huge this season,” Dortmund captain Marco Reus said.

Bayern should have claimed its record-extending 29th German championship the weekend before but was held scoreless in Leipzig. Dortmund knew that victory at Borussia Moenchengladbach, where it won 2-0, coupled with a Bayern loss on the last weekend would give it its first title since 2012. It was a slim hope. Bayern routed Eintracht Frankfurt 5-1 in Munich.

But Dortmund’s title challenge was derailed much earlier, not least in a 5-0 loss in Munich, where Bayern delivered a statement to the rest of the league.

Dortmund conceded three late goals to let Hoffenheim grab a 3-3 draw in February, when the team went through its first poor spell under coach Lucien Favre. A scoreless draw at Nuremberg followed, and then a 2-1 loss at relegation-threatened Augsburg.

Despite the setbacks, Dortmund remained in the title race even after the rout in Munich on April 4, but a subsequent 4-2 loss at home to a poor Schalke side and a 2-2 draw at Werder Bremen – where the team again conceded late – ended any realistic hopes.

“They were decisive, because otherwise we would have had another points-cushion coming to Moenchengladbach,” Reus said.

After the near miss, thoughts are already turning to next season. “I’m a positive person. Next season, it starts all over again,” Reus said. “Then we’ll do everything we can to get back to the top again in the next years and win the title once again.”

Another offseason of changes awaits. United States midfielder Christian Pulisic is leaving for Chelsea after five years in Dortmund, while the futures of midfielders Julian Weigl and Mahmoud Dahoud are uncertain, and Portugal international Raphael Guerreiro is expected to leave.

Brandt is an option thanks to a release clause in his contract, though the 23-year-old German has little reason to leave after Leverkusen clinched Champions League qualification after claiming 16 from a possible 18 points in the last six games under former Dortmund coach Peter Bosz.

“He knows what he has with us,” Leverkusen sporting director Rudi Voeller said of Brandt.

Even if Brandt arrives, Dortmund probably won’t have a better chance to capitalize on what was a difficult season for Bayern Munich, which now has the chance to claim a domestic double against Leipzig in the German Cup final on Saturday.

“The disappointment is still there because we had the chance to be German champions this season,” said Sebastian Kehl, a former Dortmund captain who now works for the club. “On the other hand, you also have to see that we delivered fantastic games in a season that finished with 76 points, especially in the opening half. We achieved much more in this year than we dreamed of at the start of the season.”