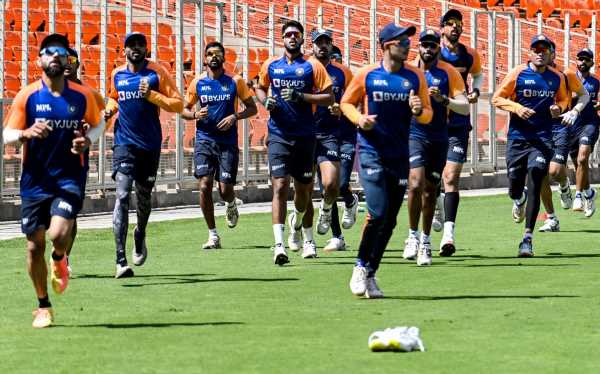 ‘Last time we experienced that the first session is probably the nicest to bat, when the sun is out and the ball doesn’t do much.’

Virat Kohli wants India to approach the pink-ball Test against England like a normal five-day match but with the sessions reversed, the home captain said on the eve of the third match in Ahmedabad from Wednesday.

Kohli’s century helped India crush Bangladesh by an innings and 46 runs in their maiden pink-ball Test in late 2019.

The 32-year-old remembers his lessons from that day-night contest in Kolkata 15 months ago and wants his team to apply them in the third Test against Joe Root’s men.

“Last time we experienced that the first session is probably the nicest to bat, when the sun is out and the ball doesn’t do much,” Kohli told a video conference on Tuesday.

“But when it starts to get dark, especially during that twilight, it gets very tricky. The light changes and it’s difficult to sight the ball.

“And then under the lights, it’s like playing the first session in the morning in a normal Test match. The ball does tend to swing a lot.

“So I think it’s a reversal of roles and something that you need to adjust to quite quickly as a batsman.”

Every batsman, however set he might be, must “start from scratch” in the evening, he said.

The morning session of a normal Test match is often the best time for a fast bowler, but Kohli recalled the Kolkata contest and said conditions would favour the quicks more in the evening.

“I think the same kind of template will be useful in this game as well, and these are the few differences from a normal Test match scenario,” he said.

India triumphed by 317 runs on a turning track in Chennai to level the four-test series but Kohli expects swing bowlers to have a greater say in Ahmedabad.

“The pink ball does tend to swing a lot more than the normal red ball,” he said.

“Yes spin will come into play for sure, but I don’t think the new ball and the fast bowlers can be ignored. The pink ball does bring them into the game.”