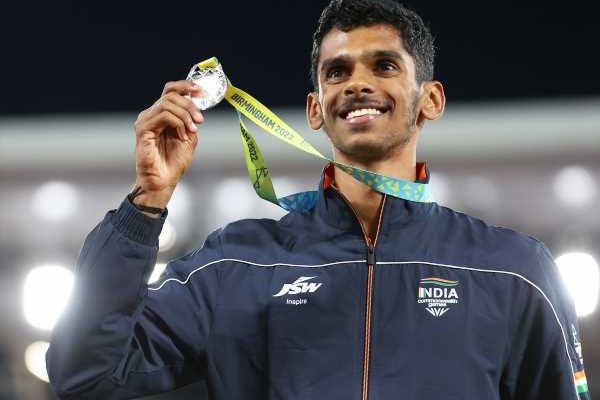 Murali Sreeshankar won silver in the men’s long jump event to give India a second medal in athletics at the 2022 Commonwealth Games in Birmingham on Thursday.

The 23-year-old National record holder soared to 8.08 metres on his fifth attempt to finish second behind Laquan Nairn of The Bahamas in a nerve-wrecking final.

There was more joy in track and field as Hima Das won her women’s 200 metres heat with a timing of 23.42s to qualify for the semi-finals.

In hockey, Harmanpreet Singh scored a hat-trick as India trounced Wales 4-1 in their last men’s Pool B match to seal a place in the semi-finals.

The other highlight of the day’s action came from the roped square which saw three Indian pugilists going through to the semi-finals, thereby making it a total of six boxers who are now assured of medals.

Here’s a look at Indian athletes’ performance on Day 7 of the Games.

Men’s Long Jump final: Murali Sreeshankar won silver to give India a second medal in athletics at the Games. The 23-year-old National record holder soared to 8.08 metres on his fifth attempt to finish behind gold medallist Laquan Nairn of the Bahamas.

Muhammed Anees Yahiya ended up fifth with a best jump of 7.97m.

Women’s 200m: Hima Das qualified for the semi-finals, winning her heat with a timing of 23.42 seconds.

The 33-year-old Bala finished 11th in the qualification round with a best throw of 59.68m in her first attempt.

Sarita failed to make the final after finishing 13th with her best throw of 57.48m.

92kg Super-heavyweight: Debutant Sagar Ahlawat continued to impress. Having defeated former Olympian Maxme Njieyo of Cameroon 5-0 in his opening round, he proved too good for Seychelles’s Keddy Evans Agnes, winning 5-0 to make the semi-finals.

Men’s doubles (Round of 32): Abhay Singh and Velavan Senthilkumar beat Luca Reich and Joe Chapman of the British Virgin Islands 11-3, 11-1.

Mixed doubles (Round of 16): Dipika Pallikal Karthik/Sourav Ghosal made it to the quarter-finals with a 11-8, 11-4 win over the Wales pair of Emily Whitlock and Pater Creed.