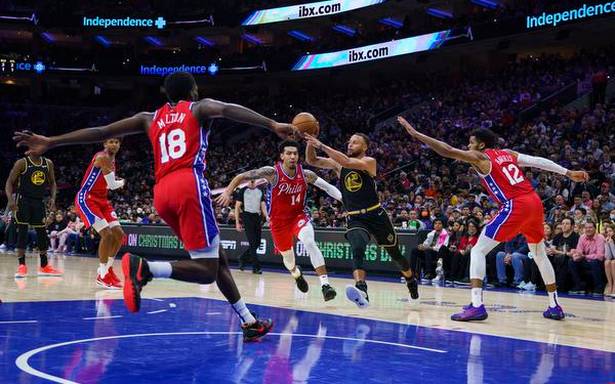 Golden State Warriors’ Stephen Curry broke the record for most three-pointers scored by overtaking Ray Allen’s record in the National Basketball Association on Wednesday. The 33-year-old sharpshooter is widely believed to be the best shooter ever, not just for the number of three-pointers he shoots per game but the high efficiency he manages to achieve. His three-pointer shooting excellence extends across distances (from the basket) and zones.

Raining fire from beyond

Steph Curry has not only shot the most number of three-pointers in the NBA but has also managed to do it in merely 789 games. Among active players, only James Harden and Damian Lillard come close to shooting 3s at a similar volume as that of Curry. But their efficiencies are lower.

Heads and shoulders above the rest

Steph Curry’s three-point shooting is among the best in both volume (no. of shots taken) and in efficiency (shots made as a % of shots taken, 43.1% for Curry). The scatter plot plots the two variables and the size of the circles denote the three-pointers made per game.

Not only does Steph Curry dominate long-distance shooting, he is among the few players who is quite efficient in shooting from way beyond the arc (Steph leads all of them in shots made that are 29-30 feet away from the basket and is tied with Damian Lillard at 32-33 feet). The Atlanta Hawks’ Trae Young holds the record for most shots made beyond 34 feet.

This image, which is a shot chart of Steph in the 2021-22 season, gives a glimpse of why he is such a dominant shooter. Not only does he shoot three-pointers at a scale that is higher than other league players (and despite heavy defensive attention), his efficiency across various areas beyond the three-point line is above average (except for the right corner).