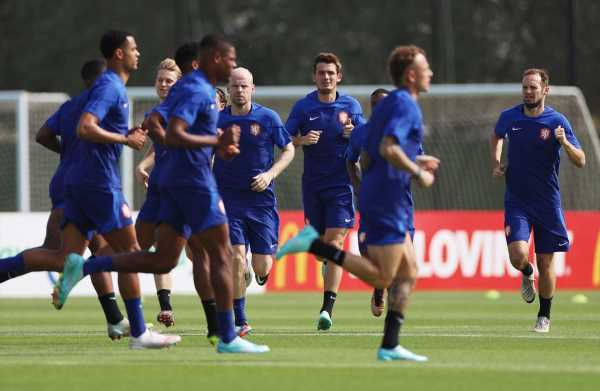 The identity of the Netherlands goalkeeper for their opening World Cup match on Monday remains a closely guarded secret, highly anticipated by supporters as coach Louis van Gaal keeps his cards close to his chest.

Whoever gets the role against Senegal in the Group A clash at the Al Thumama Stadium on Monday, however, will be vastly inexperienced after the shock snub of Jasper Cillessen, who most Dutch soccer pundits assumed would be the first choice in Qatar.

Instead, Van Gaal surprised by picking three keepers with a total of eight caps between them, continuing the indecision that has marked his choice in goal since returning for a third stint in charge of the national team last year.

Ajax Amsterdam’s Remko Pasveer is fancied to play in Monday’s match, in what would be a remarkable moment in a journeyman career. He won his first cap at the age of 38 when the Dutch beat Poland in September and kept his place for the next game against Belgium – the last the Dutch played before the World Cup.

Pasveer was originally signed by Ajax as a back-up goalkeeper but was thrown into the team when they lost their two leading keepers to suspension and injury and is now on the cusp of a remarkable achievement.

Justin Bijlow has the other caps, used by Van Gaal in his first six games in charge but not used in the nine matches since.

Andries Noppert from Heerenveen is the other goalkeeper in the squad.

In the 15 matches Van Gaal has taken charge of since replacing Frank de Boer as coach, he has also fielded Bundesliga-based Mark Flekken four times and Cillessen twice.

The 33-year-old Cillessen was the Netherlands goalkeeper at the 2014 World Cup when Van Gaal was also in charge but after 66 caps his star has dimmed.

Van Gaal said Cillessen had not been in form at NEC Nijmegen when asked to explain the omission and former team mate Rafael van der Vaart, now a television pundit, suggested Cillessen was “uncollegial”.

“You either make him first choice goalkeeper or you don’t take him,” he added.

“It is not always the case that the best player is chosen but the best team player in my opinion. Because we have to continue together for five weeks.”