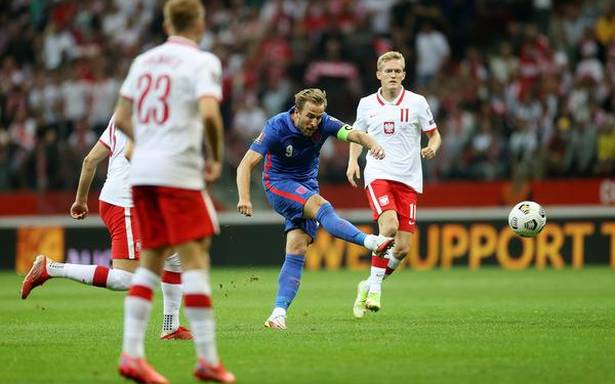 Italy, Germany, Spain and Belgium pull ahead in their groups

England’s perfect record in World Cup qualifying vanished after conceding a stoppage-time equaliser in Poland, while Italy, Germany, Spain and Belgium all won to build big leads in their groups on the road to Qatar.

Harry Kane’s 41st goal for England — a 30-metre pile driver — was cancelled out when Robert Lewandowski crossed for Damian Szymanski to head home in the second minute of injury time in a 1-1 draw in Warsaw.

England’s five-match winning run in qualifying ended, leaving Denmark as the only nation with a 100% record so far.

Still, England holds a four-point lead with four games remaining and should have no problem getting to next year’s World Cup.

Italy shouldn’t, either, after dispatching Lithuania in a 5-0 win to open up a six-point lead in its group. The recently crowned European champion extended its record unbeaten run to 37 games.

No country has a bigger lead than Belgium, which won 1-0 in Belarus to move nine points clear and to the brink of securing first place.

Spain’s lead is smaller — four points over Sweden — in a significant night in Group B. While Sweden was losing 2-1 at Greece, Spain won 2-0 at Kosovo though it has played two more games than its closest rival.

Germany beat Iceland 4-0 away and extended its lead to four points over Armenia.

It was billed as a head-to-head between Kane and Lewandowski, two of the world’s top strikers, and both delivered in the draw between England and Poland.

Kane scored perhaps his best goal for England when he collected the ball in space in a central area before taking another touch and smashing a swerving shot into the bottom corner. He moved into fifth place on England’s all-time list, 12 goals behind No. 1 Wayne Rooney’s 53.

Lewandowski failed to score in a match for the first time this season but he did play a major role in Szymanski’s first goal for Poland.

England’s lead in Group I was trimmed to four points because Albania beat San Marino 5-0 to move into second place, a point above Poland. Hungary beat Andorra 2-1 and was in fourth place, a point behind Poland.The results: Group B: Kosovo 0 lost to Spain 2 (Fornals 32, F. Torres 90); Greece 2 (Bakasetas 62, Pavlidis 78) bt Sweden 1 (Quaison 80).