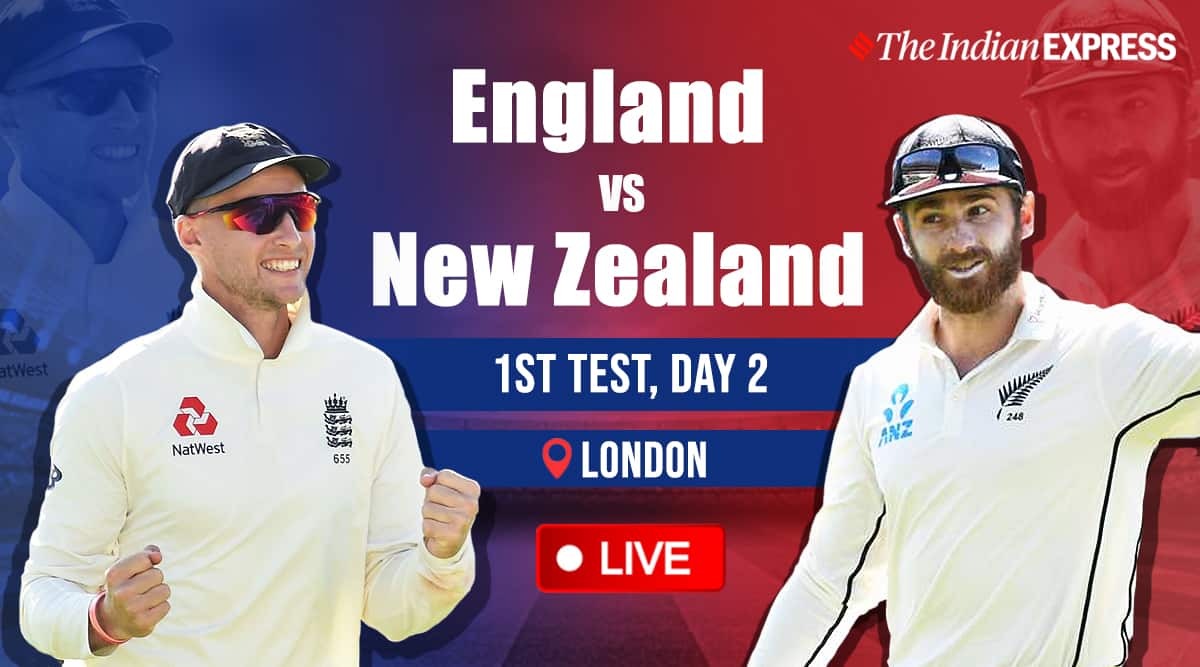 England vs New Zealand (ENG vs NZ) 1st Test Live Cricket Score Updates: Devon Conway became just the sixth player to hit a Test century on debut at Lord’s, with the left-handed opener brilliantly anchoring New Zealand to 246/3 against England on Day 1 of the first match of the series Wednesday.

The 29-year-old Conway was unbeaten on 136 to maintain the stunning start to his international career in all formats, making an array of shots, leaving well, and showing a compact defense to blunt England’s all-seam attack under blue skies at the home of cricket.

Henry Nicholls closed the day on 46 not out and was sharing an unbeaten fourth-wicket stand of 132 with Conway after paceman Ollie Robinson — one of two debutants in the England side — bowled Tom Latham for 23 and trapped Ross Taylor lbw for 14.

Henry Nicholls gets to his 11th Test fifty. A patient knock by Nicholls, he is supporting Conway really well. Well played.

250 up in the second over of the day thanks to a Devon Conway 3. Conway has defended his outside edge very well. While England have found the edge of his bat on 18 occasions, 16 of them have been inside edges. Barring two nicks through the slips, he’s covered it well.

James Anderson with a still pretty new second new ball ( 6 overs old) from the Nursery End, to Devon Conway – can he push on from 136*? He has Henry Nicholls for company on 46*. Let’s play!

Ollie Robinson will likely remember the biggest day of his cricket career for the wrong reasons after a string of sexist and racist messages he posted on Twitter from 2012-14 surfaced over social media. Soon after stumps, he read out a statement to broadcasters and other media, apologizing for his behavior.

“I deeply regret my actions, and I am ashamed of making such remarks,” the 27-year-old Robinson said. “I was thoughtless and irresponsible, and regardless of my state of mind at the time, my actions were inexcusable. Since that period, I have matured as a person and fully regret the tweets.

Conway has already struck knocks of 126 and 72 in his opening three innings in ODIs — all against Bangladesh in March — and averages 59.12 in 11 innings at Twenty20s for New Zealand following his debut in November. He was born and raised in South Africa but moved to New Zealand in 2017 and has since starred for Wellington.

Just before stumps, Conway ran for three to surpass Ganguly’s 131, which stood as the highest ever score by a debutant at Lord’s. He is the 11th New Zealand test debutant to reach three figures.

It is day two of the first Test between England and New Zealand. Earlier, 29-year-old Devon Conway was the star on day one as he scored an unbeaten on 136. By bringing up his hundred with a clip through square leg for four, the South African-born Conway joined Harry Graham (for Australia in 1893) and Sourav Ganguly (for India in 1996) in being the only non-English batsmen to score a century on test debut at Lord’s.