The insistence of some England fans to boo their players for making the anti-racism gesture has been as strong a feature of the team's Euro 2020 preparations this week as the pair of 1-0 wins. 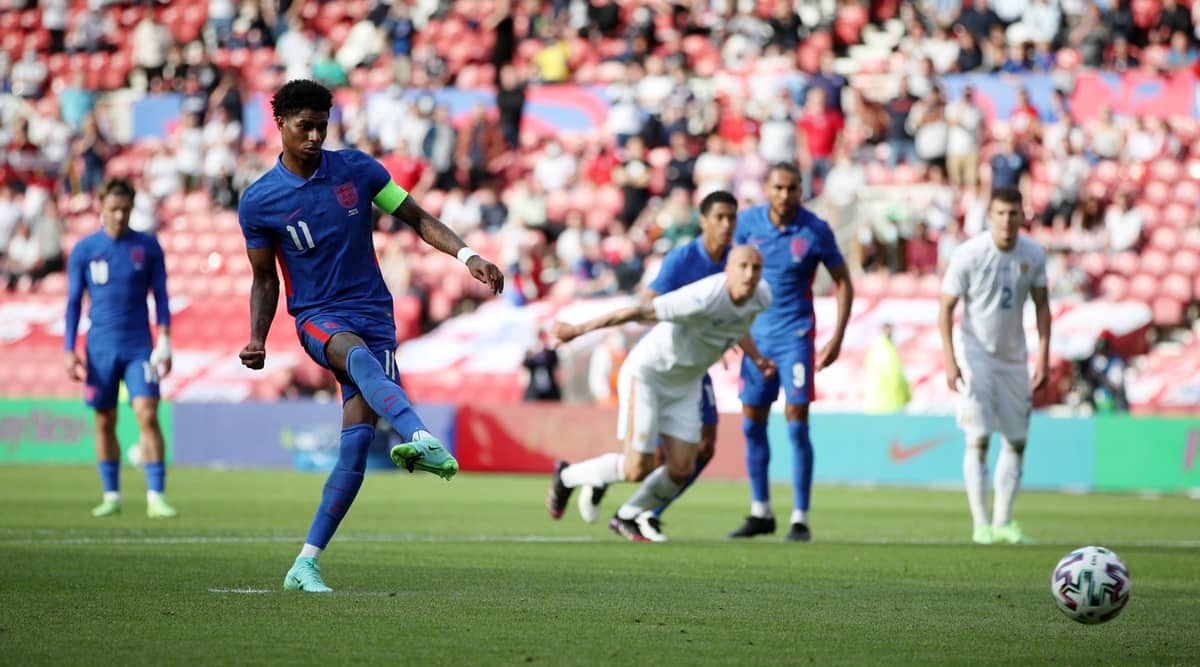 Captaining England for the first time on Sunday, Marcus Rashford heard boos from home fans when leading his team in taking a knee before a warm-up game against Romania ahead of the European Championship.

In contrast, Rashford was cheered around the stadium in Middlesbrough when he scored the 68th-minute penalty that settled a 1-0 victory.

The insistence of some England fans to boo their players for making the anti-racism gesture has been as strong a feature of the team’s Euro 2020 preparations in the northeast town this week as the pair of 1-0 wins.

The scattered disapproval was quickly countered by other fans applauding the England team, which had six Black players on Sunday, including Rashford. The same scene played out Wednesday before England played Austria.

“It’s something that we can’t control,” Rashford told British broadcaster ITV. “For us, we believe it’s the right thing to do so we’re going to continue.”

England coach Gareth Southgate has called the booing a “very strange response” and repeated Sunday that he supports his players to continue taking a knee at Euro 2020.

“I think I sadly sort of expected what happened to happen,” Southgate said. “That’s it, we are going to have to live
with that.”

Each of England’s three group-stage games is at Wembley Stadium in London where fans have not been able to watch the national team since 2019, before the COVID-19 pandemic.

England opens Group D on June 13 against Croatia, which lost its final warm-up game Sunday 1-0 away to top-ranked Belgium.

Romelu Lukaku’s 60th international goal decided the game in the 38th minute, showing agility to stretch for a bouncing ball in the Croatian goalmouth. Lukaku was denied a second late in the game by back-to-back saves from close range by goalkeeper Dominik Livakovic.

Scotland is also in Group D and prepared for facing the Czech Republic in Glasgow on June 14 by beating Luxembourg 1-0. Che Adams scored midway through though the first half, minutes before Luxembourg’s Vahid Selimovic was sent off.

England’s two games in Middlesbrough were the first chances fans had to attend national team games since taking a knee became routine ahead of Premier League games one year ago. Players have supported calls to eradicate racial injustice in society following the police killing of George Floyd in Minneapolis.

Rashford was given the captaincy as the most experienced international player aged just 23 in an experimental starting lineup, with Southgate describing it as “a good opportunity for him to show some leadership.”

The Manchester United forward calmly outwitted Romania goalkeeper Florin Ni?a with a slow run-up to score with a spot-kick awarded for a foul on Jack Grealish.

Three minutes after Rashford was substituted, a second penalty was given and taken by the player now wearing the captain’s armband. Jordan Henderson’s kick was saved by Ni?a diving to his right.

England twice struck the woodwork in the first half, from Dominic Calvert-Lewin’s header and Jadon Sancho’s shot.

Among other routine wins for Euro 2020 teams, the Netherlands beat Georgia 3-0 with Wout Weghorst and Ryan Gravenberch, a teenage midfielder from Ajax, getting their first international goals.

Denmark won 2-0 against Bosnia-Herzegovina, and Austria and Slovakia drew 0-0 in one of two matches between teams both playing in Euro 2020, which kicks off Friday.