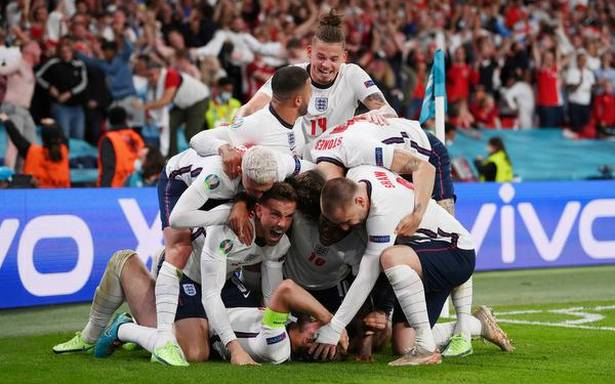 Italy, on a 33-match unbeaten run, is bidding for a first Euro title since 1968

England fans are looking forward to a first major tournament final in 55 years as their team prepares to face Italy in the Euro 2020 final at Wembley on Sunday.

Three years on from their defeat to Croatia in the World Cup semifinal, Gareth Southgate’s men overcame Denmark 2-1 in extra time at a rocking Wembley on Wednesday to reach their first European Championship final.

Italy was also pushed beyond 90 minutes by Spain in the semifinal on Tuesday, but won on penalties to keep its bid for a first Euro title since 1968 alive.

England stand just one game away from ending its long and painful trophy drought, which dates all the way back to the 1966 World Cup.

But Italy is on a 33-match unbeaten run, reviving its reputation on the global stage after an embarrassing failure to even reach the 2018 World Cup in Russia.

The decisive moment came late in the first period of extra time when Dutch referee Danny Makkelie awarded a spot-kick for Joakim Maehle’s challenge on Raheem Sterling which survived a VAR check, and England held on to seal the win after Harry Kane scored on the rebound after his penalty was saved by Kasper Schmeichel.

England has suffered semifinal heartbreak at major tournaments four times since 1966 and those agonising defeats have been etched in the psyche of English football.

But Southgate has overseen the emergence of a vibrant young team unconcerned by the failings of their predecessors.

“They’ve responded to what was always going to be a really challenging night,” Southgate said of his players, who had not conceded a goal until the Denmark game.

“We were so smooth through the quarter-final and relatively unscathed through the second round. We knew that at some point we were going to concede and we would have to respond.”

The semi-final was attended by British Prime Minister Boris Johnson and Prince William, who is president of the English Football Association.

Johnson, who initially refused to condemn fans for booing the England team while they took the knee earlier in the tournament, has not ruled out the prospect of an ‘emergency’ bank holiday should England triumph on Sunday.

But captain Kane was determined to stress that nothing was won yet.

“It’s the first time in our history as a nation, getting through to the European final at Wembley, and it’s one of the proudest moments in my life, for sure,” said England captain Kane. “But we haven’t won it yet, we’ve got one more to go,” added the forward.

Italy reached its 10th major tournament final with a tense victory over Spain.

Sunday’s match will be the culmination of a remarkable turnaround in the team’s fortunes since Roberto Mancini took over as coach following the doomed qualifying campaign for the World Cup.

“Beyond the players, I’d say that everything comes from Mancini who knows how to make the right choices,” Italy legend Dino Zoff said.

“For me, it’s not a surprise to see Italy in the final. I was convinced they’d do well.”

Midfielder Marco Verratti said the Azzurri were “climbing back to where they belong” ahead of Sunday’s final, also at England’s home ground after the pan-European tournament.

“It’s the dream you have as a kid as a footballer,” he said. “I think it will be an epic final, history-making either way.”