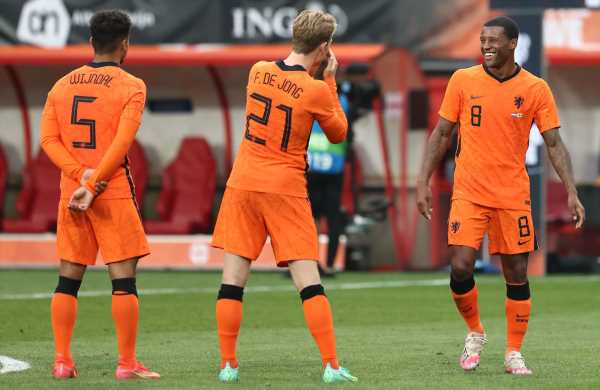 The Netherlands will be looking to make up for lost time when they begin their European Championship campaign at home against Ukraine in Amsterdam on Sunday, hoping a sea of orange will spur them on to the perfect start.

It is a return to a major tournament for the first time since the Dutch finished third at the 2014 World Cup.

Missing out on the last Euros in France and then the 2018 World Cup in Russia were a major setback and re-establishing their reputation as a footballing force is top priority for coach Frank de Boer and his team.

The Netherlands will need a positive start after their build-up was marred by media disapproval of the more defensive tactics employed in warm-ups against Scotland and Georgia.

There are also few more critical fans than the Dutch, who demand not only success but also swagger from their team and are quick to voice their displeasure when this is not the case.

There will be 16,000 on hand at the Johan Cruyff Arena, sure to be clad in the team’s distinctive colours, providing a lift for the home side and an intimidating presence for the visitors.

“The European Championship at home without fans is no championship. I’m looking forward to it enormously,” said captain Georginio Wijnaldum. Ukraine, whose pre-tournament preparations have been overshadowed by controversy over their kit, are a side capable of upsetting the odds but lack consistency.

In their three World Cup qualifiers in March, they held world champions France to a 1-1 draw in Paris, only to then drop points at home to the lowly likes of Finland and Kazakhstan.

There has, however, been marked improvement under coach Andriy Shevchenko, appointed after they lost all three group games at Euro 2016 in France.

“Hopefully there will be surprises at the tournament and we will certainly be looking to create them,” warned battling midfielder Taras Stepanenko this week.