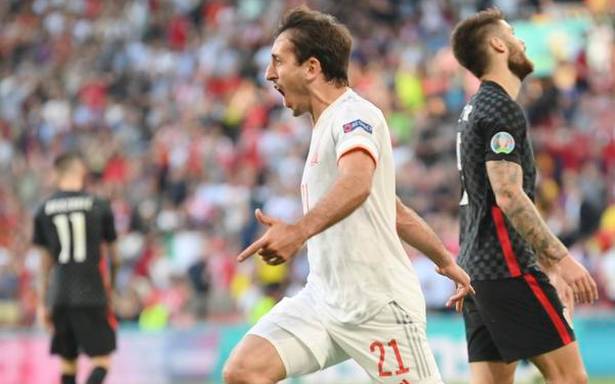 The three-times European champions will now face either France or Switzerland on July 2 in St. Petersburg.

Spain held off a remarkable Croatian fightback to win 5-3 in a pulsating Euro 2020 last 16 knockout match on Monday thanks to goals from Alvaro Morata and Mikel Oyarzabal in extra time.

The three-times European champions will now face either France or Switzerland on July 2 in St. Petersburg

Spain and Croatia were drawing 3-3 after normal time, with the goals starting when goalkeeper Unai Simon failed disastrously to control a simple back-pass to give Croatia a shock 1-0 lead.

Spain looked like they had made amends with goals from Pablo Sarabia, Cesar Azpilicueta and Ferran Torres to go 3-1 up, until Mislav Orsic scored in the 85th minute and Mario Pasalic netted two minutes into stoppage time to level for Croatia.

Spain’s goals in extra time came after Simon had made a point blank save to stop Croatia taking the lead.