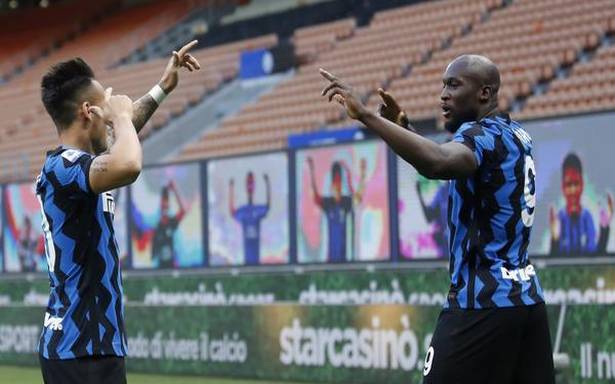 Juventus inches up to third with a win over Napoli

Romelu Lukaku scored one goal and set up another as Inter Milan moved a step closer to its first Serie A title in more than a decade with a 2-1 win over Sassuolo on Wednesday.

Lukaku headed in the opener in the 10th minute and provided the assist for Lautaro Martínez in the 67th as Inter moved 11 points clear of second-place AC Milan with its 10th successive victory.

“Lukaku and Lautaro have been working for so long together, they know what positions they have to keep now,” Inter coach Antonio Conte said. “They do so very well, they always move in synchrony.”

It was Lukaku’s 21st league goal of the season but he remains four behind Cristiano Ronaldo in the scoring charts as the Juventus forward also netted in his side’s 2-1 win over Napoli in another rearranged match.

Juventus moved into third. The nine-time defending champion is 12 points behind Inter, which hasn’t won the league title since 2010.

The match between Inter and Sassuolo was meant to be played just before the international break but was postponed following a coronavirus outbreak in the Nerazzurri camp.