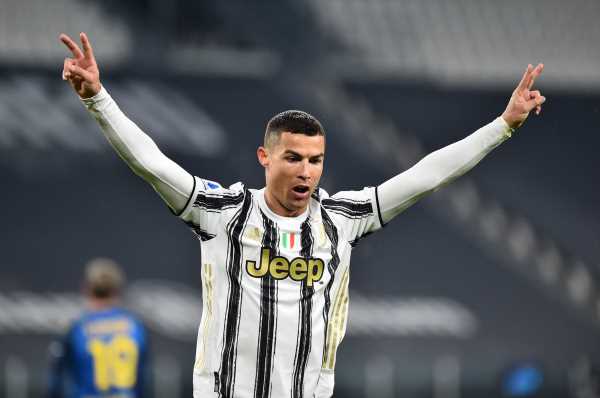 Cristiano Ronaldo scored twice and created another goal as Juventus got back to winning ways in Serie A with a 4-1 victory over Udinese in Turin on Sunday, moving the champions up to fifth in the standings.

Ronaldo opened the scoring with a trademark drive, after latching on to Aaron Ramsey’s pass in the 31st minute, before threading a perfect through ball into the path of Federico Chiesa to score Juve’s second goal four minutes into the second half.

The VAR had a busy evening in Turin. First, the referee was asked to consult the pitch-side monitor before ruling out what Udinese thought was the opener for a handball early on, before Aaron Ramsey suffered the same fate when he was penalised for handball, after a second look.

Ronaldo’s second goal put the result beyond any doubt as he took his goal tally to 14 league goals for the season — two more than anyone else in Serie A — in the 70th minute, with Marvin Zeegelaar scoring an injury-time consolation for Udinese.

There was still time for Paulo Dybala to score another goal for Juventus as Andrea Pirlo’s side moved 10 points behind leaders AC Milan, with a game in hand, while Udinese drop to 13th and are without a win in their last four games.

Pirlo admitted his team had initially struggled to make an impact as the players were still haunted by memories of their shock 3-0 defeat by Fiorentina in their final game before the winter break.

“We started frightened after the match against Fiorentina, we were afraid of the depth of the opponents,” Pirlo told Sky Sports.

“Little by little we grew up and in the second half we did better. It wasn’t the best Juventus.”

Juventus thought they had again fallen behind when Rodrigo de Paul fired home from close range.

Udinese celebrated, but the referee was asked to look again at whether De Paul had handled earlier in the move, before the goal was ruled out.

Ronaldo then took centre stage with his emphatic first-half finish, an even better pass for Juve’s second and a fine third.

Welshman Ramsey thought he had scored his first goal of the season in the second half, but again it was ruled out for handball.

Dybala’s injury-time strike completed a flattering scoreline for Juventus, given Udinese had hit the woodwork twice in the match and missed numerous other chances.

“He played one of the best games this year, he was more alive and eager and slowly he will find the best form. We need him and he needs us.” Barcelona edged La Liga’s basement club Huesca 1-0 on Sunday courtesy of a Frenkie de Jong goal made by Lionel Messi in the Argentine’s 500th league appearance for the club.

Dutch midfielder De Jong arrived at the far post to meet a Messi cross and score on the volley in the 27th minute to give the visitors a deserved lead after a rampant start.

But Ronald Koeman’s side failed to take their many other chances and in the end were made to sweat for all three points.

Huesca could have levelled in the second half when the ball trickled across Barca’s area and striker Rafa Mir directed a backheel at goal but the shot lacked power and keeper Marc-Andre Ter Stegen made the save despite seeing the ball late.

The win took Barca above Sevilla and into fifth place in the standings on 28 points, 10 behind leaders Atletico Madrid who beat Alaves 2-1 earlier on and who have a game in hand on the Catalans. Huesca stay bottom with 12 points.

“It’s evident we need to kill off our opponents in games like these; we suffered too much in the end,” said Barca keeper Ter Stegen.

“They hacked us a bit in the first and second half and we weren’t able to take our chances but we stayed focused throughout.”

Barca had been held to a frustrating 1-1 draw at home to Eibar in their last match and had also lost Philippe Coutinho to a serious knee injury but they could at least welcome back Messi, who had missed that match with an ankle problem.

The Argentine looked slightly off the pace in his milestone league match and wildly missed the target with a left-footed volley in the first half when the sensible option would have been to take it with his right.

He made amends with an clever piece of play for the only goal of the game, however, picking out De Jong with a sensational, curling cross.

Messi came close to scoring himself late in the first half with a free kick but Huesca keeper Alvaro Fernandez got across to tip his shot over the crossbar. Bayern Munich returned from the two-week Christmas break looking rusty before fighting back from two goals down to beat second-from-bottom Mainz 5-2 in a rip-roaring Bundesliga contest on Sunday.

The result left Bayern on 33 points from 14 games at the top of the league, two more than second-placed RB Leipzig who won 1-0 at VfB Stuttgart on Saturday.

Bayern midfielder Joshua Kimmich, who sparked the home side’s comeback with their first goal, conceded that last season’s Champions League winners had been below par in the first half when they missed a string of chances.

“We came out in the second half with a completely different attitude but we were still fortunate that Mainz didn’t score a third goal,” he told Germany’s Sky television.

Mainz striker Jonathan Burkardt, who scored the opening goal, said: “We played with newly-found aggression and that’s something to build on despite the fact that we ended up conceding five goals.”

The German title holders were trailing 2-0 at halftime before they woke up with their run of goals, including a brace by Robert Lewandowski which took his tally to 22 goals in all competitions.

Burkardt had fired Mainz ahead against the run of play in the 32nd minute with a superb finish from 15 metres after shaking off Jerome Boateng. Alexander Hack made it 2-0 12 minutes later with a thumping header from Daniel Brosinski’s cross.

Danny Latza missed a gilt-edged chance to add a third for Mainz shortly after the break when his shot was pushed on to the post by Bayern goalkeeper Manuel Neuer and the visitors were swiftly punished as the home side hit top gear.

Kimmich pulled one back in the 50th minute with a close-range header after Lewandowski nodded a Serge Gnabry cross into his path, before Leroy Sane equalised five minutes later with a scorcher from 20 metres into the bottom right corner.

The visitors again came agonisingly close to stunning Bayern when Robin Quaison rattled the underside of the bar with a long-range thunderbolt but once again ruthless Bayern took advantage instantly.

Halftime substitute Niklas Suele turned the tide when he volleyed home from inside the area through a forest of bodies before Lewandowski forced Mainz into submission.

The winner of the 2020 FIFA Best Player award converted a penalty after Leandro Barreiro had brought down Gnabry with a late tackle and then bundled in a Thomas Mueller cross as Mainz collapsed in the final 20 minutes.

Earlier on Sunday, Borussia Dortmund broke back into the top four after goals from Manuel Akanji and England forward Jadon Sancho gave them a 2-0 home win over sixth-placed Wolfsburg.