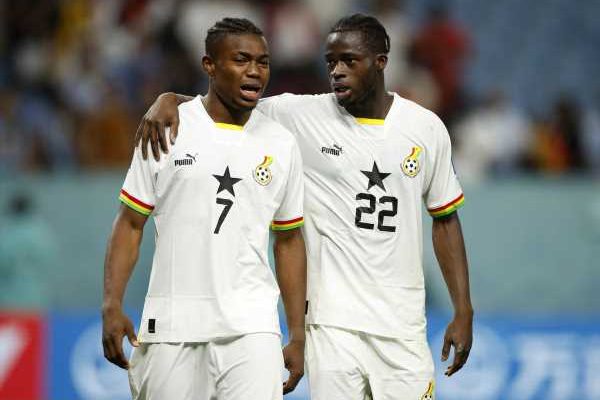 Ghana’s hopes of expunging the bitter World Cup memories of their last clash with Uruguay did not bear fruit on Friday as they were forced to relive the nightmare all over again in crashing out of the finals in Qatar.

Another squandered penalty against the South Americans, and a 2-0 defeat in their last Group H game, meant they let a commanding position slip and finished last in the standings.

Friday was supposed to be a chance to not only extract revenge but also book a place in the next round, in addition to setting a new mark for African football, which has never had three teams advance past the first round at a single World Cup.

But where Morocco and Senegal succeeded in reaching the last 16, Ghana did not, even after being in the second spot in the standings going into the final round of group games.

The country remains fixated on the drama of the 2010 quarter-final against Uruguay when they came within a whisker of being the first Africans to reach the World Cup last four.

Back then they were about to score a last-gasp winner in extra time, on a bitterly cold night in Johannesburg, when a goal-bound effort from Asamoah Gyan was stopped on the line by the hand of Uruguay forward Luis Suarez.

While Suarez was sent off, Gyan hit the resultant spot kick, which would have put Ghana through, against the crossbar, taking the tie into a post-match shootout, which Uruguay won.

The penalty heartache was revived all over again on Friday at the Al Janoub Stadium as Ghana were given a chance to take the lead when Mohammed Kudus was brought down.

But skipper Andre Ayew, the lone survivor of the 2010 squad, hit a feeble effort which was saved by Sergio Rochet and after that the Black Stars’ challenge visibly deflated.

To make matters worse, Uruguay scored twice not long after the botched penalty to leave Ghana with the difficult task of fighting their way back, which proved beyond them.

Ghana had always been expected to struggle at this World Cup after an unconvincing qualifying campaign in which a Nigerian goalkeeping howler saw them win a fortunate place in Qatar.

They had also been humiliated by the tiny Comoros Islands at the Africa Cup of Nations finals in January, exiting early after which they fired their coach.

The appointment of German-born former international fullback Otto Addo in February raised eyebrows as his only previous coaching experience was with the youth teams of Hamburg and Borussia Dortmund.

Addo made it clear he was only staying on for the World Cup and Ghana must now look to start afresh, again having to make a decision on whether to go with a local or bring in a coach from Europe or Latin America.

Whoever takes charge has lots of promising talent to mould. Ghana had the youngest average squad age at the tournament of 23.5 years old and the World Cup experience will stand them in good stead, however bitter it might taste right now.