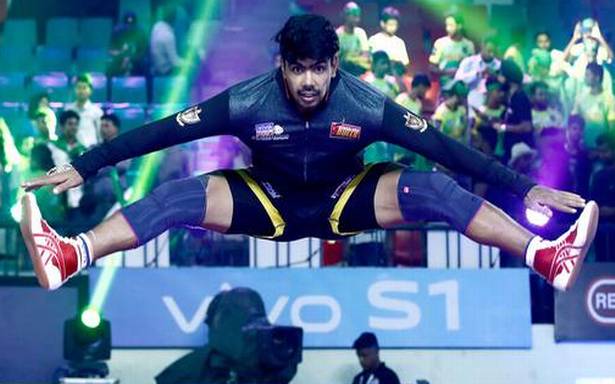 What do players who love kabaddi, a contact team sport, do during lockdown? They resort to home-grown techniques to stay agile and in touch with their signature moves, as leading players Rahul Chaudhari and Pawan Sehrawat discovered over the last 15 months.

After a lull in 2020, the sport is back on its feet this year, with Nationals held in March. Now, players are training hard, and looking forward to the Pro Kabaddi League, expected to be held later this year.

Although Rahul has played just one season for Chennai in the Pro Kabaddi League, he already has loyal fans. They call him the ‘Thalapathy’ of the team.

He hopes to return that love in the upcoming season, which he has been looking forward to for more than a year. The pandemic put a pause to most sporting activities over the last 15 months, but kabaddi players were among the most frustrated of the lot, he says. “To feel the rush that kabaddi gives, it has to be played as a team. The sport requires many players, in close quarters, and that has not been possible since the pandemic.”

Rahul Chaudhari during a game

However, Rahul has been bettering his raiding techniques by practising a few moves alone. “It isn’t ideal, but that is the best I could do given the circumstances,” says the 27-year-old.

The Delhi-based player has come a long way since he began playing kabbadi in school. “I went to a Government school, and the other kids who went to CBSE or ICSE boards did not even know what kabaddi was. They used to look down upon us who played it,” recalls Rahul. But all that has changed in recent years, thanks to Pro Kabaddi League, which, like IPL, gave the sport a fillip by packaging it for TV audiences.

Now, a growing number of fans, who fondly call Rahul ‘poster boy’, watch his every move, on and off court. His stylish haircut, tattoos and workout regime have gained popularity, especially during the lockdown.

If you visited Pawan Sehrawat’s home in Bawana village near Delhi last year, you would probably have bumped into him running up and down the stairs. Or jumping from one place to another. These techniques have been part of the lockdown jugaad for the 25-year-old to keep in touch with kabaddi.

Pawan’s nickname is ‘hi-flyer’ because he reaches a height of almost 5-feet when airborne from the ground during a match, in a bid to escape the grasp of his competitors.

This special jump is the result of many years of practise, which continued through lockdown as well. “When I was young, I was healthy, and so my coach told me to concentrate on power kabaddi and not jumping techniques. But I was fascinated by that skill and worked a lot on my core body to perfect the jump,” he recalls.

All that came in good stead when he took on the field at Pro Kabaddi League. Now, he has come to be known as one of the best raiders in the sport. Although the last 15 months were dull for him, he says he kept at it: practising raids at home and at a stadium nearby.

“I also have the habit of watching a lot of old kabaddi matches on television, to get references on how other players go about their job. Watching Pardeep (Narwal), I learnt how to do the dubki move (ducking low to evade defenders). Watching Siddharth Desai, I learnt how to use the power aspect. I keep trying to learn new skills to stay relevant to the modern needs of the game.”