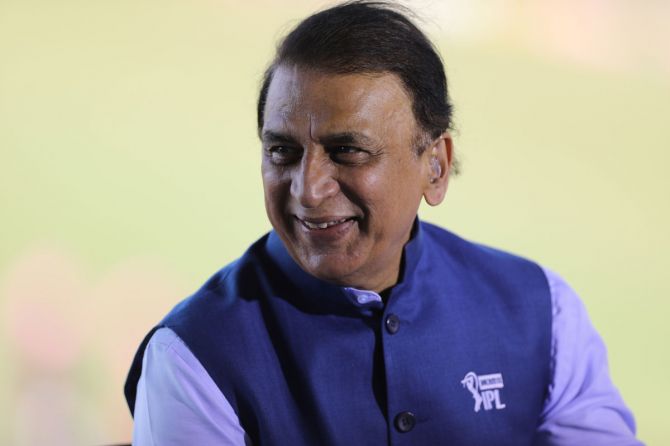 Cricket legend Sunil Gavaskar cleared the air on the remarks he made on Virat Kohli and his wife Anushka Sharma during the commentary for the IPL game between the Royal Challengers Bangalore and the Kings XI Punjab on Thursday night.

Kohli was dismissed by KXIP bowler Sheldon Cottrell for 1.

Speaking to Boria Majumdar on the India Today channel on Friday, Gavaskar said he had not blamed Anushka for Kohli’s batting failure, but merely made a reference that the RCB captain’s only practice during the lockdown was when he played tennis ball cricket with his wife.

‘As you can hear from the commentary, Aakash (Chopra) and I were doing commentary at that stage for the Hindi channel. Aakash was talking about the fact that there has been very little chance for any proper practice in the lockdown for everybody and that has actually shown in the rustiness of some of the players in their first matches, say Rohit Sharma didn’t strike the ball well (in the first game) and now in the second match he got runs.’

‘ So that is only bowling, I have not used any other word. It was the bowling, she was bowling to him, that’s all.’

‘Where am I blaming her? Where am I sexist in this?’ Gavaskar asked.

Anushka had taken exception to Gavaskar’s remarks. ‘I am sure over the years you have respected the private lives of every cricketer while commentating on the game. Don’t you think you should have equal amount of respect for me and us?’ Anushka asked. “Gavaskar said he only stated what he saw in the video with reference to the commentary about some batsmen struggling to get going in the IPL due to lack of practice during lockdown.

‘I am only stating what was seen in the video that was recorded by somebody in the neighbouring building and that was put up, that’s the only thing I am doing.’

‘The point I am trying to make is that there was no practice for anybody, including Virat, in the lockdown. The whole thing was to say that is because of the lack of practice is why a lot of them are struggling to get going straightaway, that’s all.’

‘I am not being sexist, if somebody has interpreted it, what can I do?’

‘Firstly, I would like to say again, where am I blaming her? I am not blaming her. I am only saying that the video said she was bowling to Virat, so Virat has played only that bowling in this lockdown period.’

‘It is a tennis fun ball game that people have to pass time during the lockdown, so that’s all. Where am I blaming her for Virat’s failures?’

Gavaskar pointed out that he has always championed wives accompanying cricketers on tours and even during matches played in India.

‘Similarly, cricketers, when they go out on tour or even when they are playing domestically at home, why can’t they have their wives with them? Because after their working hours are over, they have to get back to their wives like every other common man does.’