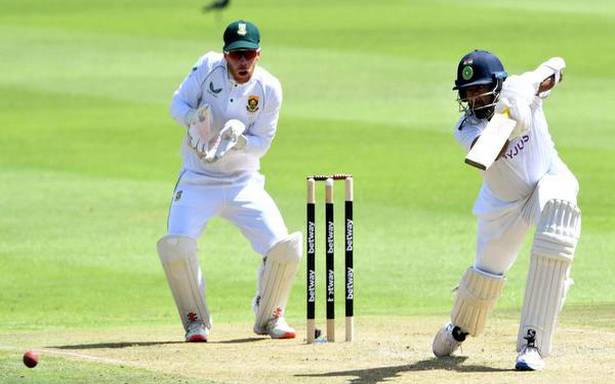 R. Ashwin batted with fluency and freedom and a testing pitch.

He said after the first day’s play here, “There was a time when I was keen on being technically right and in the process lost some of my flow.”

He added, “Now I am playing more of my natural game. I get into positions to play some shots which some specialists might not be able to do so.”

Ashwin said, “Right from the Australia series, I have been batting well. Batting coach Vikram Rathour has been helpful.”

He said there was no deliberate plan for him to be attacking. “The first ball was straight so I straight drove. So I just responded to the balls.”

Asked about Mohammed Siraj’s fitness, he said, “The medical team is assessing him. Knowing his history he should come back and bowl for us.”

On match-winning totals at the Wanderers, Ashwin said, “Always good to bat first and post 250. South Africa has made 250 here and dominated Test matches from there.”

About the surface he said, “The pitch was two-paced. Little different to a typical Wanderers pitch.”

Queried about the impressive left-arm seamer Marco Jansen, who has been impressive against India, he said, “Left-armers always add variety. He’s got height and bounce. He’s special. Nice side on action, gets close to the wickets.”

On K.L. Rahul adapting to Test cricket, he said, “He has found a formula for success in Test cricket. Obviously he has the talent and the skill set. There is no one formula for Tests. It keeps throwing questions at you.”

About him playing a part with the ball, Ashwin said, “No one can predict how a pitch will behave. Hopefully, some footmarks would develop and there could be some assistance for me.”