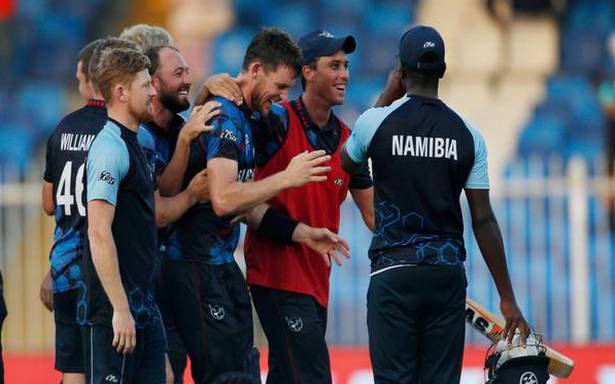 But from Friday onwards, Fredericks might have some competition. At least, if Gerhard Erasmus demands his rightful place under the sun, no one would complaint.

Erasmus and a bunch of unknown cricketers from a country with a population less than West Delhi, earned its right to rub shoulders with the cricketing elites by beating Ireland in their ICC T20 World Cup.

Namibia had once played the tournament proper of the 50 over World Cup in 2003 where they were pummelled by India. But that was 18 summers back and since then despite being an associate member, they have improved their game.

And Erasmus as captain has been the leading light as his 53 off 49 balls would prove. Not to forget David Wiese, their professional cricketer, who has played across in T20 leagues.

“We run a tight ship. Small country, small number of people play cricket. We should be proud of ourselves,” Erasmus said in the post match presentation.

“Hasn’t sunk in yet, maybe on the way home.” He expressed happiness that as senior players he and Wiese could secure a historic win, their second in the competition after beating Netherlands earlier.

“I count on my senior men to stand up when the pressure is on. And two of us did it tonight. Hopefully we can do it through the tournament.” With two wins from three matches, Namibia join Sri Lanka in Super 12 stage from Group A while Ireland are eliminated, just like Netherlands.

Ireland captain Andrew Balbirnie admitted that his team was hurt by the defeat and it will be hard to forget.

“Hurts a lot. Really wanted to win. It wasn’t to be (for us). We didn’t get enough runs. It will be hard to get over it, and it hurts a lot,” he said.

“I think Wiese played a brillant hand when the rate was at 8, and their skipper saw them home. There are lot of good cricketers in there in Namibia.”