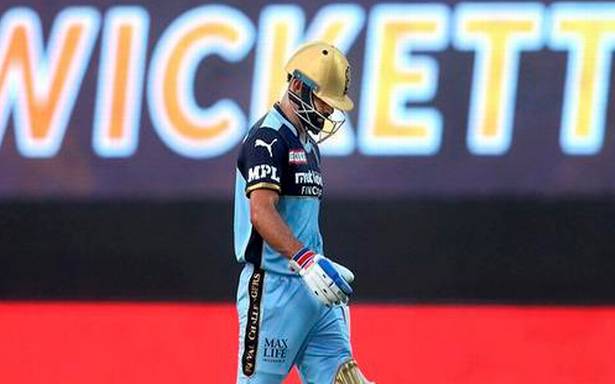 Royal Challengers Bangalore captain Virat Kohli on Monday rued his side’s batting collapse in a nine-wicket drubbing by Kolkata Knight Riders in the IPL here and termed it a wake-up call for the team.

Electing to bat, RCB were all out for a paltry 92 in Kohli’s 200th IPL game and KKR chased down the target in just 10 overs by reaching to 94/1 with Shubhman Gill (48) and debutant Venkatesh Iyer (41 not out) adding 82 runs for the opening wicket.

“We were 42 odd for one and then lost about five wickets within 20 runs, which is a very difficult situation to come back from. Bit of a collapse there for us, bit of a wake-up call and might as well have this at the start of the second leg so that we know exactly what we need to work on,” Kohli said after the match.

“It was important to get a good partnership on this surface. You can’t afford to lose four or five wickets within 20 runs. We didn’t expect that much dew to kick in so early, we couldn’t have predicted that.” Asked if the result was due to rustiness, Kohli said, “You can make the argument that we were rusty but as professional cricketers, you are expected to turn up and adjust to the formats, that’s the dynamic of world cricket today.

“We have never found any troubles doing that but sometimes it can take you a game to get into the tournament. You have to stay with the 8-ball, especially in this format. If not, then the other team is going to be all over you.” On the brilliant performance by KKR spinner Varun Chakravarthy (3/13), Kohli said, “Pretty good, that’s exactly what I was saying in the dug-out, he’s going to be a key factor when he plays for India. We need to see performances like these from all the youngsters so that the bench strength of Indian cricket stays strong.

“And, he’s someone who is going to play in the near future for India and it’s a great sign,” the Indian captain said.

Kohli, who is going to relinquish RCB captaincy after this edition, said there was no question of pressing the panic button just yet.

“We have five wins from eight games, we expect a loss here and there in this tournament. That’s part and parcel of things. You have to take it in your stride like you take your victories in your strides as well.

“We just need to be professional and stick to our strengths and make sure that we execute the plans that we have properly on the field. We have absolute confidence on this squad that we’ll be able to pull up from the next game onwards and putting strong performances.” KKR skipper Eoin Morgan said it was a rare top-class performance by his side.

“The talent we have within our squad, it counts for nothing, you have to still go out and show how strong you are and we did today.

“I didn’t think the wicket changed a great deal, RCB started well, but taking a wicket at backend of power play changed things for us. Collectively, we took valuable wickets. Maxwell, AB, Virat — we managed to get on top of all of them, it’s very rare as well.” “As a group, with the expressive nature with which the guys play, playing under me or Baz, should be an absolute treat. We’re not going to knock people for playing their shots.” Morgan said his side have a long way to go and need a lot of things to go right.

“Today’s the right start, need that run of confidence. We haven’t turned up for the majority of the tournament, but today was a great start.” Player of the Match Chakravarthy said it was a flat pitch with little spin on offer and so he had to keep it on the stumps.

“Would like to give credit to the bowlers who bowled in the powerplay for the discipline. There wasn’t much in the pitch.” On the hat-trick ball, which he had wanted to review but was shot down by Morgan, Chakravarthy said, “I thought it was out but just saw the replay that there was an inside edge.