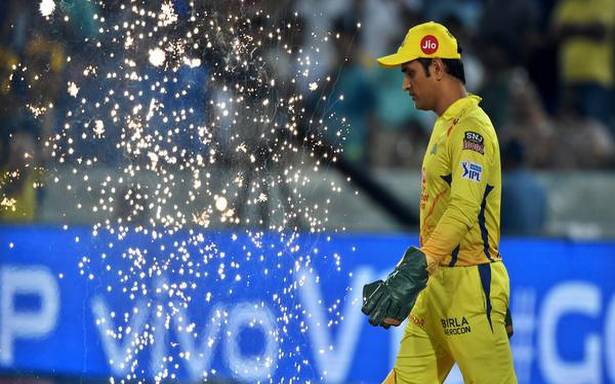 Chennai Super Kings skipper Mahendra Singh Dhoni made it amply clear that he would be wearing his favourite yellow jersey for at least one more season and the ‘Whistle Podu’ army will certainly see him playing a “farewell game” at their beloved Chepauk.

While it was always on the cards, Dhoni on Tuesday for the first time dropped elaborate hints that he will be seen playing next season as CSK is et to go through a big transition phase post mega auction.

“When it comes to farewell, you can still come and see me play for CSK and that can be my farewell game. So, you will still get that opportunity to bid me farewell. Hopefully, we will come to see Chennai and play my last game over there and we can meet fans there,” Dhoni said while interacting with fans during the 75th year celebrations of ‘India Cements’ held virtually.

If sources are to be believed then CSK will be retaining three players — skipper Dhoni, all-rounder Ravindra Jadeja and prolific opener Ruturaj Gaikwad for the next auctions.

The iconic former India captain has not played in Chennai since 2019 as the 2020 edition of IPL was held in the UAE and CSK played matches in the first phase of the tournament earlier this year in Mumbai before it was suspended due to a breach in the bio-bubble.

Also, responding to a fan’s question on his decision to retire from international cricket on August 15 last year, Dhoni said “It can’t be a better day than that, 15th of August.” About CSK as a team holding its nerves in crunch situations, Dhoni said they try to keep it normal and prepare for the opposition they would be up against.

“We are a process-driven team, we believe in the process and we know that if we follow the process if we execute the plans well, if we do the small things right, we will get the desired result, we know the result is a byproduct and that also keeps us calm,” he added.

Also, the CSK captain stressed about importance of living in the moment.

“We live in the moment and enjoy each other’s company. We know that if we play to our potential, we can beat the opposition. If the opposition has to beat us, they have to play better cricket.” To a question if he would be seen in Bollywood after retirement, he said acting was not easy and he would stick to cricket.

Dhoni said he is not looking at Bollywood as a post-retirement stint as he believes acting is not an easy skill and he will stick to cricket.

“You know Bollywood is not really my cup of tea. As far as advertisements are concerned, I am happy to do them. When it comes to movies, I feel it’s a very tough profession and very difficult to manage.

“I would let the film stars do it because they are really good at it. I will stick to cricket. The closest I can come to acting is advertisements and nothing more than that,” Dhoni, who is also Vice-President (Marketing) of India Cements, added.

India Cements Vice-Chairman and Managing Director N Srinivasan on his part, said that the company has gone to another level since the advent of CSK.

“In the last 10 years since the advent of CSK, India Cements has gone to another level. We have to thank only one person for that, our captain Dhoni. He knows cement, he has visited factories and addressed people in the factory also,” Srinivasan said of the legendary skipper.

“He (Dhoni) will give the biggest gift to India Cements by winning the IPL this year,” the former BCCI chief quipped.