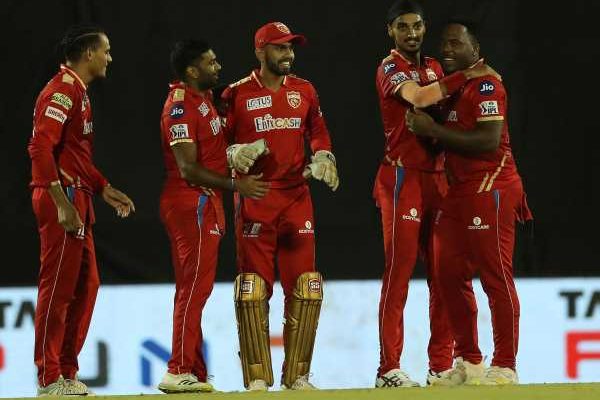 Punjab Kings were a jubilant lot after their emphatic 54 run victory against defending champions Chennai Super Kings at the Brabourne stadium in Mumbai on Sunday.

Head Coach Anil Kumble congratulated the team on their fine showing against CSK, which was set up by Liam Livingstone’s fine all-round show as the England all-rounder hit a quickfire 60 from 32 balls and took 2/25.

‘Everyone contributed, that’s what you want in a win. This is the first time in Mumbai in this tournament so far where a team has defended a target in a night game,’ Kumble said in his dressing room speech after the game.

He also praised the two young debutants — wicket-keeper-batter Jitesh Kumar and pace bowler Vaibhav Arora — for their fine showing against CSK. Jitesh stroked a quickfire 26 from 17 balls and took a couple of catches, while Arora shone in his first IPL match with excellent figures of 2/21 in his four overs.

‘Livi (Liam Livingstone) was the man of the match but our men of the match were the other two debutants Jitesh and Vaibhav. Jitesh, to come in your first game and do what you did, well done and Vaibhav,’ Kumble said.

‘A night to remember! Appreciations and celebrations were in full swing after a special victory in the battle of the Kings!’ Punjab Kings captioned the Instagram video.