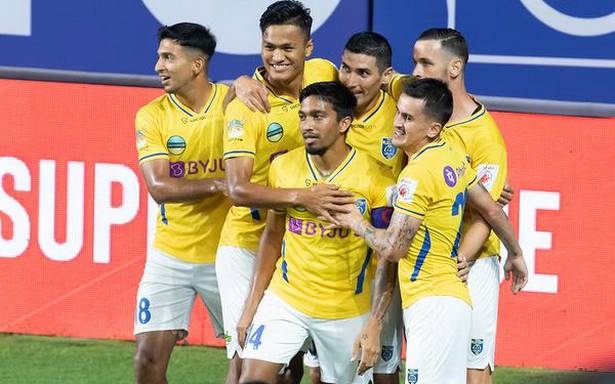 Pereyra, Sahal and Luna find the target in 3-0 romp

Three nights ago, the men from Kochi were placed ninth in the 11-team league. On Wednesday, they found themselves in the third spot after posting an impressive 3-0 win against Chennaiyin FC at the Tilak Maidan Stadium, Vasco, through goals from Jorge Pereyra Diaz, Sahal Samad and Adrian Luna.

They are now just a point behind the leader Mumbai City FC. Blasters are on 12 points, the same as Jamshedpur FC, which is placed higher, having scored more goals (the two teams are tied on goal difference). Chennaiyin remained on 11 points and dropped to sixth place.

Coach Ivan Vukomanovic could not have hoped for a better follow up from his boys after the stunning victory over defending champion Mumbai on Sunday.

Though Chennaiyin put up a good fight, Blasters was clearly the better side. They attacked with relish and made good use of the opportunities that came their way.

One of them arrived as early as the ninth minute. Diaz made it count as he firmly drove the fine assist from Lalthathanga Khawlhring past a desperately diving goalkeeper.

Chennaiyin custodian Vishal Kaith then had a moment to forget as he twice failed to clear the ball, resulting in Sahal scoring on the second attempt off a pass from Alvaro Vazquez.

The opening half saw Chennaiyin come up with some fine counter-attacks. But 24 minutes into the second half, Luna’s strike sealed the contest. He was named Hero of the Match. Few would argue with that.