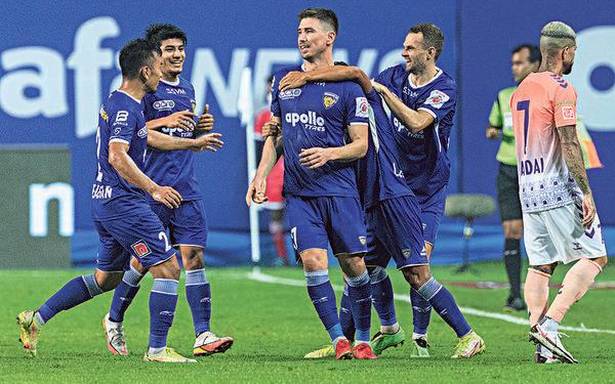 An opportunistic strike by Germanpreet Singh and a floating long-ranger by Mirlan Murzaev powered Chennaiyin FC to a 2-1 win over Odisha FC 2-1 in an Indian Super League match at the Tilak Maidan Stadium, Vasco, on Saturday.

The victory, its first in the last four games, helped CFC climb to the third spot with 11 points from six matches while OFC dropped a spot to fifth (nine from six).

Germanpreet, who replaced Edwin Vanspaul in the XI, struck at the right moment to provide the momentum to Chennaiyin. He slotted home from close range in the 23rd minute.

The move was initiated by Murzaev, who passed the ball to Anirudh Thapa. The latter’s cross was deflected back into play by Odisha ’keeper Kamaljit Singh and fell to Germanpreet. His first shot — a left-footed strike — hit a defender and went back to him and Germanpreet didn’t do any mistake with his right foot the second time. Minutes into the second half, Lallianzuala Chhangte had a golden opportunity to make it 2-0. A swift counter-attack saw Murzaev put Chhangte through with a slick pass, but the forward, with just the goalkeeper to beat, hit straight to Kamaljit.

Odisha almost equalised when a 30-yard blinder from Aridai Suarez got past Chennaiyin goalkeeper Vishal Kaith, but the ball struck the post and rolled out. In the 58th minute, Vishal jumped high to pull off a one-handed save off an Aridai shot.

In the 63rd minute, Murzaev’s thunderbolt from well outside the box beat Kamaljit all ends up.

CFC missed a golden chance to go 3-0 up when Lukasz Gikiewicz fluffed a penalty in the 85th. In the dying minutes, Javier Hernandez pulled one back from Odisha with a brilliant long-range strike.