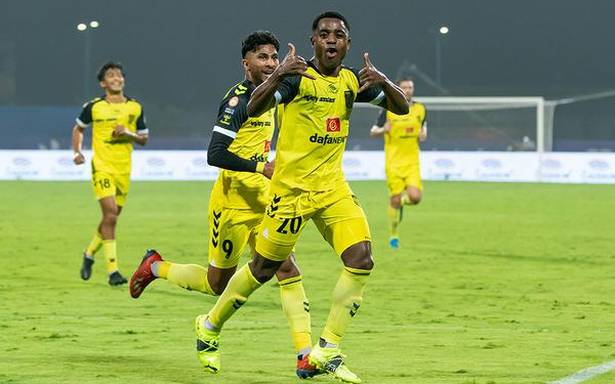 Hyderabad FC returned to winning ways with a thumping 6-1 win over Odisha FC in Match 43 of the Indian Super League at the GMC Athletic Stadium in Bambolim on Tuesday.

Bartholomew Ogbeche scored a double as the men in yellow-and-black climbed to second on the table, just one point short of leader Mumbai City FC after eight games.

The first two goals of the match came from own goals — the first coming from OFC defender Hector Rodas from a Joao Victor header, amid a penalty-box melee, in the ninth minute, while the latter came off the chest of HFC’s Juanan in the 16th minute.

Garcia and Ogbeche paired up again in the first half, with the latter heading the ball in from a corner kick in the 39th minute to make it 2-1 for HFC.

The second half was a HFC show, with the match changing from a loss to thrashing, to an absolute delirium for Kiko Ramirez’s men.

Garcia started the scoring in the second half scored with a precise left-foot finish in the 54th minute, while Ogbeche’s strike from outside the box gave HFC a three-goal cushion before the hour mark. ‘Super-sub’ Javier Siverio made it five withing four minutes of coming on to the pitch, while Joao Victor, the HFC captain, gave the cherry on top as he scored from the spot in the 86th minute to make it 6-1 for HFC at full time.

With the win, Hyderabad extended its invincible run to seven games this season, while Odisha FC suffered its third loss in four games as the side remained seventh on the table, with ten points off eight games.