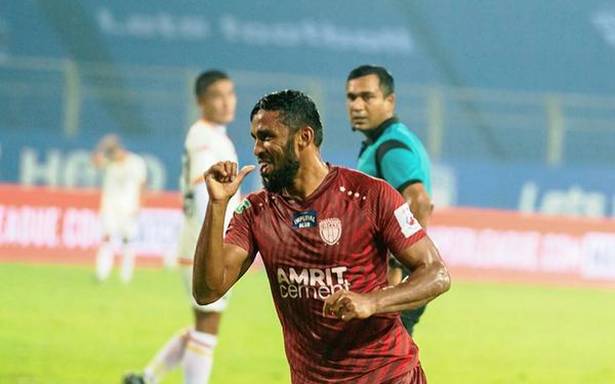 NorthEast United FC produced a nice turnaround in the second half to outplay SC East Bengal 2-0 in an Indian Super League fixture at Fatorda on Friday.

V.P. Suhair and Patrick Flottmann produced the strikes for North East United, which looked a very average side in the barren first half.

The opening half saw listless exchanges in the midfield.

The NorthEast suffered a blow just before the start losing Hernan Santana to injury. The Spanish midfielder hurt himself during the warm-up process forcing the Highlanders to field only three foreigners in a refreshed start-list. East Bengal also lost its Croatian defender Franjo Prce, who twisted his ankle and hobbled off midway through the match.

The second half completely changed the complexion of the game as NorthEast United arrived with a renewed resolve and got two quick goals around the hour mark.

V.P. Suhair found the target in the 61st minute as the NorthEast sharpened its offensives with regular incursions in the East Bengal box. Suhair showed the right knack for the goal as he collected a cross from Mapuia, got the better of East Bengal defender Amir Dervisevic and finished with a powerful punch.

The Highlanders doubled the lead in the 68th minute when its Australian defender Patrick Flottmann nodded home a floater from Imran Khan following a free kick.

East Bengal was down to 10 men in the added time when Antonio Perosevic received a red card for venting his frustration with a body charge on the referee.