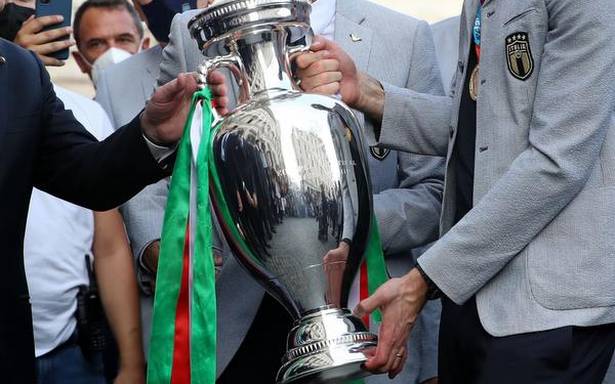 Some Italian stadiums have not been updated since the 1990 World Cup, the last major football tournament hosted by Italy alone.

Italy is considering making a bid to host the 2028 European Championship or the 2030 World Cup but must improve its stadiums if it is to succeed, the head of the Italian Football Federation (FIGC) said on Thursday.

Italy beat England on Sunday to win their second European Championship. The two countries could also be rivals to host the World Cup, which is held every four years, as British Prime Minister Boris Johnson has backed plans for a bid by the United Kingdom and Ireland for the 2030 finals.

“We will evaluate an Italy candidacy for the 2028 European Championship and the World Cup of 2030, in which the centenary of the world championship is celebrated,” FIGC president Gabriele Gravina told a news conference. “Let’s try for the Euros first, then we’ll think about the other one.”

Some Italian stadiums have not been updated since the 1990 World Cup, the last major football tournament hosted by Italy alone.

“We must improve the conditions of the stadiums because if we do not start an investment path in infrastructure we will never be able to aspire to organise such a great event,” Gravina said. “We must do things quickly. For me, we cannot go into a bid thinking that ‘we have the stadiums, but if you give me the event, I will then improve them’. That’s not how it works.”

Other countries that have expressed an interest in hosting the 2030 World Cup include Spain and Portugal.

Argentina, Uruguay, Chile and Paraguay have announced they will make a four-way bid, and Bulgaria, Greece, Serbia and Romania have said they are planning a joint bid.

The bidding process formally starts in 2022 with world football governing body FIFA to choose the hosts in 2024.