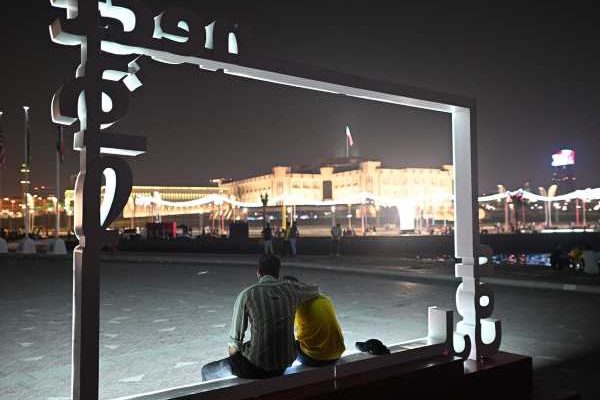 A group of Arab friends living in Qatar’s capital Doha met up over cocktails and snacks last week, exchanging opinions as they flicked through profiles of gay men on dating apps Tinder and Grindr.

The phone of one flashed with a message from a suitor around the corner. The man in his 20s leapt up from the table, leaving to meet his date face-to-face.

The friends, who met up days before the soccer World Cup kicks off in Qatar on Sunday, are part of a Doha gay scene that’s managing to fly under the radar in a nation where same-sex relations are illegal and punishable by up to three years of jail-time.

“We socialize together. We go out for dinner. We go to parties. We go to the beach,” said another gay man, from the West, who has lived in the wealthy country for over a decade. “We don’t make-out with our boyfriends in public or wave rainbow flags, but we certainly don’t lower our voices.”

Reuters spoke to four gay men in Doha – the Westerner, two Qataris plus an Arab from elsewhere in the region – who said they lived in the country, a magnet for foreign workers, because they had well-paid jobs, plus friends or family there.

All four spoke on condition of anonymity due to concern over possible punishment from authorities. But they said they could live out their lives to some extent, meeting potential partners at private parties or via dating apps typically blocked in Qatar which they accessed via a VPN.

“It’s not all suffering,” said a 30-year-old gay Arab man who has lived and worked in Doha for nearly 10 years.

In fact, the four expressed worries about the wave of international criticism about gay rights in Qatar brought by the World Cup, fearing they could lose the freedoms they do enjoy should the opprobrium lead to a public backlash against the LGBT+ community once global attention moves on.

“What about us, who have lived in Doha for years and made Doha queer?” the Arab man said. “What happens when the World Cup is over? Does the focus on the rights stop?”

These men present just one snapshot of life for gay people in the Gulf nation – and the four recognise their relative freedoms are a product of privilege; they can afford to live alone, host parties and meet partners in high-end restaurants or nightclubs, where the strict rules of Qatari society are often more relaxed.

Other members of Qatar’s LGBT community have reported being detained, some as recently as September, Human Rights Watch (HRW) has said. The group also accused authorities of ordering some transgender women to attend conversion therapy.

A Qatari official criticised the HRW report as containing false information and said the country does not license or operate conversion centres.

Nas Mohamed, a gay Qatari physician who has lived in the United States for about a decade, welcomed the attention the tournament has drawn to Qatar’s rights record, saying it prompted him to speak out widely about his sexuality.

“When you’re an LGBT person (in Qatar) and don’t get to experience being your full authentic self, then you just lose your sense of self,” Mohamed told Reuters this month at a clinic he operates in San Francisco.

Other groups including Amnesty International have also criticised Qatar for discriminating against the LGBT community.

A Qatari official said the country “does not tolerate discrimination against anyone, and our policies and procedures are underpinned by a commitment to human rights for all”.

NO DISPLAYS OF AFFECTION

Qatar, a rich gas-producing nation, attracts workers from across the region and the wider world. Qatari nationals make up just 380,000 of its 2.9 million population, with the rest foreign workers, ranging from low-income construction workers to high-powered executives.

The four men interviewed by Reuters said that there were strong financial and career incentives to residing in the country, adding that life for gay people there was better than in some other places in the Middle East.

They cited Saudi Arabia and Iran, where men have been sentenced to death for being gay..

“If you’re an expat, you’re able to live your life like you want,” said the 30-year-old Arab man. “At the same time, I know I can live like this because I am privileged. I know gay men in workers’ camps wouldn’t be able to live the same way.”

Qatari organisers of the World Cup have warned visitors against public displays of affection but say that everyone, no matter their sexual orientation or background, is welcome at the event.

During the tournament, medical practitioners will not ask patients about their extramarital sex, religion or any other status, according to the Yousef Al Maslamani, the healthcare spokesperson for the FIFA World Cup.

In the 12 years since Qatar was named host of the 2022 tournament, the country has faced intensifying criticism over its rights record on laborers, women and the LGBT community.

The furore has been fuelled by comments from public figures including former Qatar player and World Cup ambassador Khalid Salman who told a German broadcaster that homosexuality was “damage in the mind”.

“Qatar and FIFA had over a decade to introduce fundamental protections based on sexual orientation and gender identity, but failed to do so,” said Rasha Younes, LGBT+ researcher for Human Rights Watch.

“In 2020, Qatar assured prospective visitors that the kingdom will welcome LGBT visitors and that fans will be free to fly the rainbow flag at the games. But it begged the question: what about the rights of LGBT residents of Qatar?”