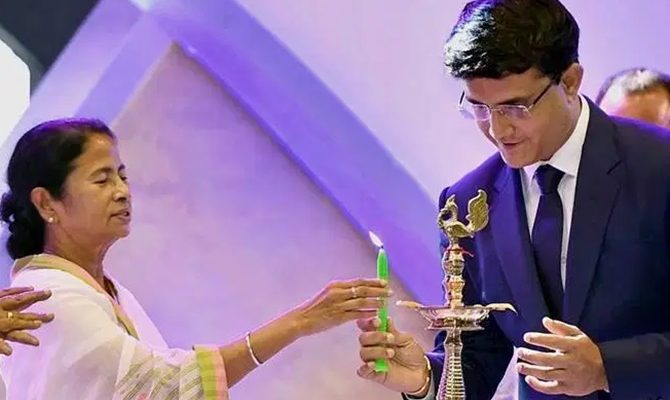 West Bengal Chief Minister Mamata Banerjee on Monday said she was “shocked” that former India captain Sourav Ganguly was “deprived” of a second term as the Board of Control for Cricket in India (BCCI) president.

Banerjee also told reporters in Kolkata on Monday that she would urge Prime Minister Narendra Modi to intervene so that Ganguly is allowed to contest the elections for International Cricket Council (ICC) chief.

The issue of ICC chairmanship will be up for discussion when the BCCI holds its Annual General Meeting on Tuesday in Mumbai, where Roger Binny, a member of the 1983 World Cup winning team, will replace Ganguly as the new Board President.

“Sourav Ganguly is not only the pride of Bengal but also of the entire nation. He has led the cricket team and BCCI with the utmost dedication and responsibility. He has proved himself to be an able administrator and I am shocked by his removal from the BCCI president’s post,” she said.

The Supreme Court had given a three-year extension to both BCCI president Ganguly and secretary Jay Shah, son of Union Home Minister Amit Shah.

“But for reasons not yet known, Jay Shah is still continuing as the BCCI secretary while Sourav Ganguly has been removed from the position. Our grievance is why Sourav Ganguly was let go from BCCI. We want to know on whose order it was done. We believe that there was injustice done to Ganguly,” she said.

Every country that plays cricket knows about him, and it is a “matter of shame” that he was ousted from BCCI “unceremoniously”, Banerjee said.

“This is my humble request to Prime Minister Narendra Modi to allow Sourav to run for the ICC post. He is a national treasure,” she said.

Banerjee said she does not have any problem with Jay Shah continuing at the BCCI as he is not a BJP member. “If he does good work, I will support him, but if he doesn’t, we will question him,” she said.

She requested the Centre to consider this matter in the light of future of sports in the country.

“Sourav is not affiliated with any political party. My request to the Centre is that this matter should not be treated politically or vindictively. I, once again, request the government to not act vindictively and take the decision on the basis of betterment of cricket and sports,” Banerjee said.

The TMC earlier claimed that it is an example of ‘political vendetta’ that Amit Shah’s son Jay Shah can continue as the BCCI Secretary for a second term but Ganguly can’t do so as its president.

The TMC had also accused the BJP of “trying to humiliate” the former Indian skipper as it failed to induct him into the party.

Ganguly, at one time, was rumoured to be the man BJP wanted to rope in for a leadership role in the party’s West Bengal unit, as it was looking for a face to counter Chief Minister Mamata Banerjee’s charisma.