With Chelsea looking secure in the top four with 64 points from 35 matches, the final UEFA Champions League place looks to be a three-way fight between Leicester, West Ham United and Liverpool. 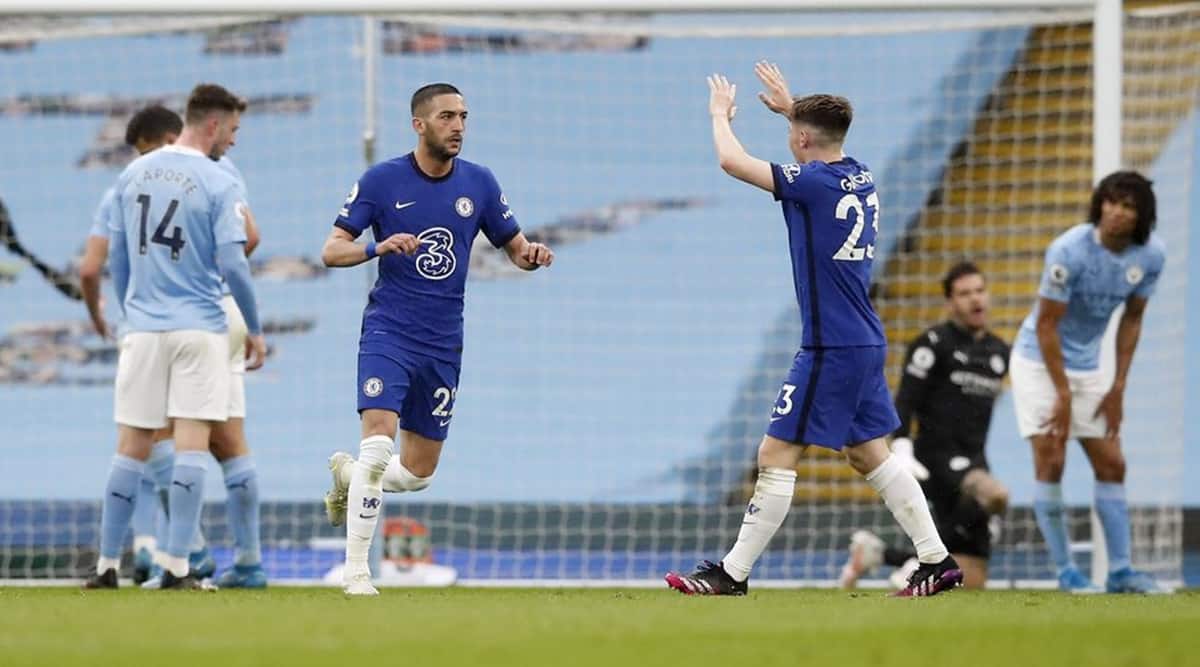 Hundreds of Manchester City fans gathered outside the Etihad Stadium for a Premier League title celebration that proved premature as Chelsea ruined the script with a last-minute 2-1 victory on Saturday.

City manager Pep Guardiola left out a host of first-team regulars for a game regarded as a dress rehearsal for the Champions League final and paid the price as he was made to wait a little longer to seal his third title in four seasons.

Raheem Sterling gave City the lead in the 44th minute and Sergio Aguero had the chance to double their lead before halftime but his attempted Panenka penalty misfired and Edouard Mendy made a simple catch.

Chelsea, who also made changes to the side that beat Real Madrid to reach the Champions League final, drew level through a low drive from Hakim Ziyech in the 63rd minute.

They then stunned City when Marcos Alonso’s scuffed shot floated past Ederson.

It left City on 80 points with three games left, 13 ahead of Manchester United who have five to play. They could still secure the title this weekend if United lose at Aston Villa on Sunday.

United have three games coming up in five days, and even if they win all three City would win the title by beating Newcastle United on Friday.

As well as delaying City’s title lap of honour and putting down a psychological marker for the Champions League final, Thomas Tuchel’s side took a massive leap towards securing a top-four finish as they moved into third spot above Leicester City.

Chelsea have 64 points, a point more than Leicester, and six ahead of fifth-placed West Ham United.

“We are sad because we lose — we wanted to close the Premier League today — but we have to be focused,” Guardiola, whose side beat Paris St Germain in midweek to set up a clash with Chelsea in Istanbul, said. “Football is unpredictable and we have to focus on the game at Newcastle.”

On Aguero’s costly miss, he said: “If he scores you would say he is a genius. I say to the players to take one decision. Panenka, right, left. Pick one.”

It has been quite a week for Tuchel, who described it as a “huge win” after Wednesday’s exploits against Real Madrid.

“That had a huge impact mentally so that was a fantastic reaction from the boys,” he said.

With Chelsea looking secure in the top four, the final Champions League place looks to be a three-way fight between Leicester, West Ham United and Liverpool.

Leicester’s Friday night defeat by Newcastle left the door ajar for the teams below them and Liverpool took advantage with a 2-0 win over Southampton thanks to goals by Sadio Mane and Thiago. They moved up to sixth place with 57 points, six behind Leicester who face a tough run-in.

“We will have pressure for as long as we win as that means we have something to fight for. If not, we don’t,” Liverpool manager Juergen Klopp, whose side face Manchester United in a re-arranged game on Thursday, said.

Fifth-placed West Ham, who play Everton on Sunday, have 58 points.

Tottenham Hotspur’s slim hopes of finishing in the top four now look non-existent after they slumped to a 3-1 defeat at Leeds United, leaving them in seventh place.