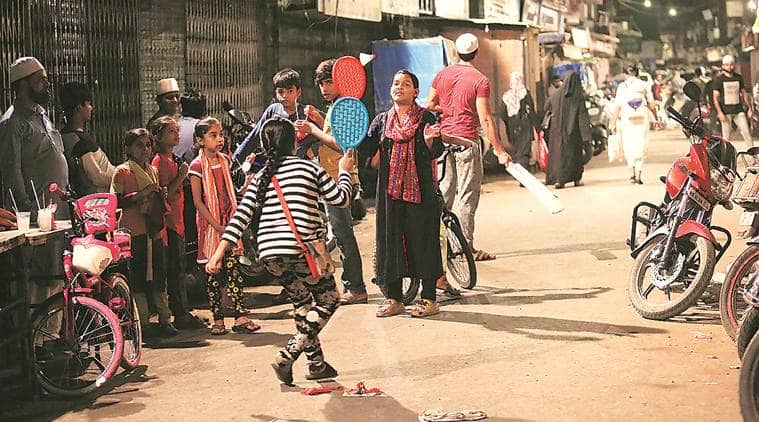 “It’s Faina, like S-A-I-N-A, TV-waali badminton didi,” the 19-year-old says, after rounding up the shy group of boys and ensuring all their names are included and spelt correctly. The dozen gully-badminton enthusiasts, aged 7-19, have trooped out of their homes at 11 p.m on a Bandra street that’s gently winding down nearing midnight, though it suddenly lights up with white, faux-feathery fireflies going back and forth to an unhurried tock-tock-tock sound. It’s actually the start of the gully-cockbat badminton season, a unique phenomenon that coincides with the month of Ramzan.

Much before the Badminton World Federation formalised outdoor shuttle to rope in greater numbers this last fortnight, the ‘Ramzan season’ of cock-bat badminton (these are thick, hollow, plastic TT bat-like paddles in bright colours that control the rubber-plastic shuttles) had become an annual ritual in Muslim localities across Mumbai. Informally played —it’s nothing fancy, just stand in one spot along the sidewalks and keep hitting the shuttle back and forth for hours on end—cork-bat shuttle, occupies the crucial hours before the 4 a.m Sehri. “It’s perfect to stay awake, to keep sleep at bay and stay fresh,” Faina, who shepherds her flock of wide-awake playmates, says.

The 9th Junction between Hill Road and SV Road, just off Bandra (W) station has two iconic institutions – Lucky restaurant and the Jama Masjid. All available Ramzan late-night lighting is used up as are the corner-shops known for their bamboo cane-carved lamps, as impromptu cork-bat games spring up. Owners Tiger Khan and Zaid Khan, now in their 20s, remember childhood Ramzans spent thwacking away at the shuttle on the streets – and being quite good at the game, fashioned out of TT-like bats and shuttles that children could buy. “We are grown-ups now, we don’t need to be kept busy with games to stay awake,” they laugh.

There’s no net and no score-keeping; just the calm effort to preserve energy in the fasting month and wait for the break of dawn. It’s a recurring sight at Kurla, Masjid Bander, Pydhonie and Nagpada. Zaffer Sayyed is 64 now, and insists similar cork-bats (they cost Rs 40 – a must pre-Ramzan purchase) might be seen in Lucknow, Kolkata, Hyderabad and Delhi, though it’s been a part of Mumbai for as long as he recalls.

“When I was young we used to have ‘par ke shuttle’ (feathers), and we called it Murgi. Then we had small plywood bats called Pichchi, and that time we’d go look for closest street gaslight, as the traffic got sparser (than usual),” he remembers. He played on the Ali Umer street, where his family’s lived for over 100 years and where former cricketer Ghulam Parker would also step out for midnight-cock-bat.

“Parents would find it difficult to keep children awake till the day’s first-meal Sehri. Back then there was no TV and mobile-phones, and even if there were, TVs would be wrapped up in a cloth for a month. Instead of daily struggle of wakening the children, they’d be packed off at night to play badminton outdoors,” he recalls. Cricket wasn’t as popular back then in the 60s (“and we weren’t as crazy about cricket then, badminton was “bharatiya khel”), he adds. Carrom (several national champions came from here), kabaddi and kho-kho were played as well as chhappa (the hopping over squares game) and Lagorcha (pithu), but nothing quite took over footpaths and open spaces as cockboat badminton in Ramzan.

He recalls how without any conscious planning, badminton blended beautifully into the fixed and disciplined month-long routine: Iftaar (breaking fast at dusk) at 7:11 pm, followed by the routine evening prayer, Maghrib Namaaz, then the hour-and-half long Tarawih (Ramzan-specific-prayers), some freshening up, snacking a tad and off to the streets for this unique outdoor badminton. “Every street had different rules, though ‘shuttle blank gayaa’ used to be the most common fault,” he laughs.

The badminton games would continue up to suhoor, the pre-dawn meal. In time, cock-bat badminton became as omnipresent as the ittar stalls that sprung up on Ramzan nights. There was also a ‘Royal Oudh’ shot, made up on a Bandra street, borrowed from one of the 100 fragrances, that included fascinating nuanced aromas with unsubtle names like Blue Lomani, Sidra, Zafran and Musk.

“Basically, all of them are the same only,” laughs Umar Malik (14) who studies at the nearby convent, and has steered clear on PUBG and night-cricket, the other options, happy with his gully badminton. “You just hit the shuttle one-touch high and keep it off the roads, but people randomly come up with names for shots just like that,” he chortles. Royal Oudh is cutting the shuttle with the edge of the bat, not the face, though the fun is in keeping shuttle in pendulum for as long as you can.

Ramzan is also when parents go easy on tuitions and studies along with sleep-times. Faina says she’s played a bit with the long-stem racquets in school, but never competitively. “I like cock-ball badminton. My mother also used to play. Actually, the nearby large ground is only for gents (unwritten rule), space is limited, so all of us girls and boys play on the streets,” she adds. “Lambe racquets expensive bhi hote gai aur toot jaate hai. These are fine. We shop for them before our season,” she says.

Zaffer’s amused crib is about —what else – “the youth of today.” “When we were young, gym-vim ka koi wajood nai tha. We would only train with akhaada ustaads, dand baithaks and solid body building outdoors. Now noone plays physical sport! They’ve made fitness into a fad. At least in Ramzan, everyone gets out and kids play badminton,” he adds.